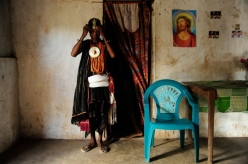 This activity, which is part of the 03/04 Programme, has 2 parts. In the first part, we'll show the short Basoan by Miguel Eraso and then afterwards reflect on the work with him. In the second part, we'll talk with Xabi Erkizia and discuss his work Lian Nainen oroitzapenak (Memories of Lian Nainen).

Hearing
Memories of Lian Nainen
Xabier Erkizia
Sound work for four loudspeakers based on field recordings and interviews carried out in East Timor during 2008 and 2009.

Translated literally from the Tetum language, Lian Nain means lord or master of words, and this is the name given to the person responsible for safeguarding and transferring each community's collective and common knowledge. The principal task of the Lian Nain is to listen to all kinds of voices and sounds generated in their environment, which entails dealing with an immense amount of acoustic and non-acoustic signals of different types: human voices, animals, spirits, plants, rocks...

The importance of the Lian Nain in Timorese culture is vital for understanding the resistance strategies used for centuries by the Timorese, who have managed to maintain their identity through orality and aurality despite having suffered real genocides.