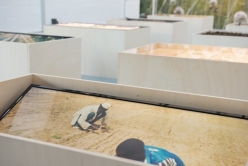 This solo exhibition by Uriel Orlow (Zurich, 1973) brings together the artist’s latest pieces. It will also be the first solo exhibition by the Swiss-born, London-based artist in Spain. Uriel Orlow creates his pieces using a variety of different formats. His artistic practice is built upon research which is geared towards multidisciplinary processes including video, photography, sound, drawing and installation His work addresses spatial manifestations of both individual and collective memory as well as history's blind spots. “Microhistories”, the telling of these, the crossovers between them and the different ways they are represented are key to his work.

Among the artist’s projects which will be exhibited in Tabakalera are Theatrum Botanicum, Soil Affinities and The Fairest Heritage. These works enable Uriel Orlow to explore colonial processes which affect historiographical transformations via the circulation of seeds, flowers, plants and healing remedies.

Uriel Orlow’s work has been shown in museums and art centres across the world, including Tate Modern, Whitechapel Gallery and Palais de Tokyo, as well as in international contemporary art contests such as the Sharjah Biennial, the Venice Biennale and Manifesta 12.

His films have been screened at film festivals including Locarno and Visions du Réel in Nyon (both in Switzerland).