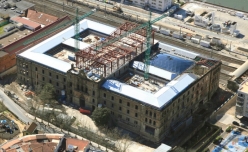 During the Architecture Week we will offer guided tours around such a historical building as Tabakalera-San Sebastian revealing the contents and programs that we will develop there.

From tobacco factory to international centre for contemporary culture

The Tobacco Factory from San Sebastian opens its doors.

2001
San Sebastian City Council, the Council of Gipuzkoa Province and Basque Government set up a society with the intention to locate in the building an international center of contemporary culture.
2008
An International architectural competition is held for the renovation of the building. Jon and Naiara Montero´s project wins. More information: Project competition for the architectural renovation of tabakalera.
2011
The renewal starts with the demolitions, followed by foundation works that still continue during 2012.
2013
The building celebrates its 100th aniversary. The structure and cover are finnished in November. During 2014 the rest of the works are done: internal clousures, installations and other finishes.
2015

The renewall ends in June with urbanization works.