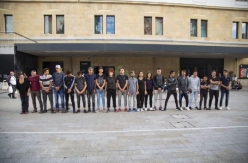 Which places in Donostia do we frequent with our friends? Who do we run into? Do we feel welcomed in these spaces? Would we like to change the relationships that arise? Do we feel that we are experiencing any oppression? How does it manifest itself? How could we transform certain power relations?

During the 2019/20 academic year we have launched a series of workshops on cinema, screen printing and choreography in which different artists and guest film-makers will participate. We start in September by attending one of the screenings of the San Sebastian International Film Festival and we hope to finish having left a collective creation on one of the walls of our city, established a brand of clothing and having even produced our own film.

If you are one of those young people who uses Tabakalera in their spare time and want to join the group, write to us at hezkuntza@tabakalera.eu or find us on Fridays around the building!

During the months of September and October Julieta Juncadella and José María Avilés, film-makers and students from the Elías Querejeta film school propose a workshop to bring the language of film closer to the group and think of cinema as a tool for expression.

At the methodological level, it is proposed to divide the workshop into three blocks. The first, most theoretical block, will cover key conceptual issues in the world of cinema – what is meant by a shot, a sequence, a script – and also more practical topics like knowing how to use a camera, a tripod, a sound recorder, etc. In the second part, small, more practical exercises will be carried out using the Tabakalera building as the search space. Finally, two groups will work in parallel to create two short films, following the guidelines previously studied: script creation, storyboard, recording and collective editing.

This workshop, in collaboration with Maddi Zumalabe and Jon Aranguren (Asteazkenak Estudioa), proposes an approach to the technique of screen printing, with the aim of being able to create our own designs and print our clothes.

The process will briefly cover all the phases of creation in screen printing: drawings through which to generate the initial ideas and sketches, DIY construction of the necessary components such as the exposure unit, and looking at the different printing techniques in more detail. The objective is to think of images that represent us as a collective and at the same time generate tools that allow a degree of sustainability and autonomy.

In the first sessions, through drawing, we will develop ideas to create the logo or brand that we want to print on our clothes. What message do we want to convey? As a group of young people, what kind of drawing might represent us? Then we will learn how to build an exposure unit in the Hirikilabs space in order to be able to project and seal our drawings on the screens. And finally, once the screens are finished, we will learn how to print the created images.

By means of improvisation-contact methods and body expression exercises, we want to put into practice a danced choreography, dealing with situations of power that result from oppression based on race, gender, sex, social class etc. These workshops facilitated by Rachid Farhan and Zahrat Essawssane Bourhil will also be used to dialogue about issues concerning gender and masculinities: identifying stereotypes, gender roles, a reflection on inequalities and power relationships. They have been designed using a participative and creative approach that allows all participants to freely take part in the reflection process through dynamic games.