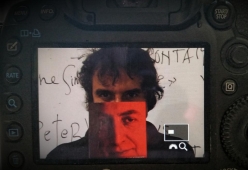 Revolutionary workshop: on walking and telling (by letter) coducted by Javier Rebollo

“Let’s shoot and make portraits , write diaries, autobiographies… Let’s reach the truth lying. All fiction is autobiographical and all autobiography is fictional, according to Barthes formula . Let’s be generous and humble with ourselves and others. Let’s shoot strangers tickets collected at the supermarket which we carry in our pockets; Let’s shoot and tell because we love, like it was a game. Let’s see where it all started in art history and make questions.

Of course, we will have to read that Chinese courtesan who made lists under the pillow, Perec, Joe Brainard, see those who ” were written ” before we started to do so. The video letters by the Japanese who started the genre Terayama and Tanikawa. The work of On Kawara , who has just died and who we cherish. Ai Wei We’s chinese letters, written from the wall, from exile, from anywhere. The clues of the Auto-Biography by Philippe Lejeune, which are three different things. And our private, anonymous, portable correspondence. Sent at dawn, lost in hard drives.

To walk around, an essentially revolutionary action; because it is for free, especially when you are going nowhere like in this workshop. Because knowing how to get lost, in a City, in a film, like Benjamin and Breton asked for,  is an art that very few know how to practice”. Javier Rebollo