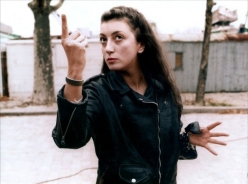 One hundred years have passed since the birth of Éric Rohmer (1920-2010, Paris). We could continue celebrating his cinema as we have always done: by reviewing his films, his texts, and his work for the big screen and television – the titles and their stories are there. But we could also go a little further and ask ourselves other questions, move the camera, seek out the reverse angle shot, review the background of his images, and stop to contemplate the places where the main story is apparently not happening, but instead another story.

This is an exercise of that other story.

We start with Rohmer and propose another journey.

This is the 21st century, this is the Tabakalera film hall, this is a search for dialogues, echoes, and correspondences, this is the new cinephilia, this is the other story, this is to see an unforgettable dance in an Éric Rohmer film and want to know more: who is dancing, for whom, why.

“We are still in mourning. One month since Pascale Ogier died in her sleep. Still, nothing can soften the intolerable cruelty of that news. Around her lovely face, memory cannot yet set in. Pascale lives on.

When death comes, the grace of the young woman still spreads throughout the city. Nothing can prevent it; nothing can contain it. A great 25-year-old actress was born, as sumptuous and simple as a Renaissance castle on the banks of the Loire River.”

Pascale's birth name is like from another time: Pascale Marguerite Cecile Claude Colette. As if they were five sisters in a single, endless body; slim, long arms, dark circles, and a smile forever – forever young. It was the eighties in Paris and Pascale was the most modern; she would have it no other way. Everyone from Roland Barthes to Jim Jarmusch passed through her house. The new cinema of the new wave was written in her house: her mother, Bulle Ogier, was one of the great actresses of the moment. Barbet Schroeder, her mother's partner, was also one of the great producers of French cinema. Sooner or later it was going to happen and, finally, it happened: Pascale said at home that she wanted to be an actress. That she was going to drop everything and become an actress. She was studying at Sorbonne University - Paris 3 when she decided to change her literature and film notes for script readings and camera tests.

This is a review of her film work: Éric Rohmer, Jean-Claude Brisseau, Jacques Rivette, Ken McMullen, and Jim Jarmusch. This is an exercise that starts deep within the image, in the background, when Pascale was still an extra. We start with those first gestures on camera. There is something revolutionary about watching well-known films and paying special attention to one of their supporting actresses. Revolutionary because it's new. Revolutionary because it's beautiful.

All of her filmography fits into six short, intense, dazzling years. And once that review has finished, the feeling of subsequent emptiness lingers on. The feeling described by Marguerite Duras in her obituary.

Pascale died young. The chronicles of her time wrote that she was at the peak of her career and that it was all due to an acute myocardial infarction. Time passed, and then we read more about the nights of Paris –or Madrid, or Berlin– in those years, the eighties: heroin, endless nights, wounded youth, accidents due to overdose... death riding.

Pascale dances. Her film career is a move towards that final dance forever: she begins singing in a medieval film. Then, little by little, we see her doing karate in the streets of Paris, travelling around on a moped, racing across bridges, stealing a dress, navigating the channels in a boat, protecting herself from the cold with her leather jacket, and talking about ghosts just before disappearing forever after a dance to the tune of a song by Elli et Jacno entitled Les Tarots (Les Nuits de la pleine lune / Full Moon in Paris, Éric Rohmer, 1984):

Que faire d'un si triste message? / What to do with such a sad message?

On nous balance dans l'arène / They throw us into the arena

Faut-il que je passe aux aveux? / Do I have to confess?

This is her biography/filmography. It includes the things she filmed and the things she didn’t film, as we finish with a film dedicated to her and in which the exercise is no longer to look into the depths to observe her gestures but instead to imagine where Pascale might have appeared in that last story about Mississippi.

And she appears. And she dances. And she is transparent.

Preceded by a conference with Philippe Azoury, journalist and film critic (19:00).