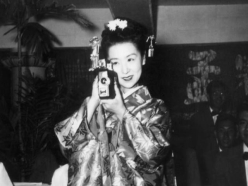 Kinuyo Tanaka: a star behind the camera

It is 1953, in Shibuya, one of the busiest neighbourhoods in Tokyo. A woman uses a megaphone to direct a team of more than sixty men. It is Kinuyo Tanaka (1909-1977), the legendary film star and director, and the film they are working on is the first directed by a woman in Japan after the Second World War. Taking place just seven years after women gained the right to vote and the country was transformed under the Allied occupation, the impact and historical significance of this scene are undeniable.

Following a debut at the age of fourteen, Tanaka became one of the most prominent actresses in the national cinema. She worked with all the “great masters of Japanese cinema”, bringing to life characters such as the wife betrayed by her husband in Tales of Ugetsu (K. Mizoguchi, 1953). Chameleon-like, petite and agile, she captivated audiences all over the world for her ability to condense the intense emotions repressed within her into a small gesture or an elusive look.

In fact, her towering acting career overshadowed her work as a director, which began in 1953. Tanaka was the first and only female Japanese director to create a post-war filmography (six films in ten years), something which was also exceptional in a global context. Some questioned whether a woman would be capable of directing films, whether it was the whim of an ageing star, and Mizoguchi, with whom Tanaka collaborated so much as an actress, commented that she “didn’t have what it takes” to be a director. But her talent and determination enabled Tanaka to break the glass ceiling of the extremely hierarchical and patriarchal Japanese film industry.

Not all were detractors: Tanaka began her adventures behind the camera surrounded by established directors. For her debut, Love Letter (1953), K. Kinoshita wrote the script and Naruse helped to choose the cast and crew, even accompanying her during the shooting to offer advice. Ozu provided her with a script for her second film, The Moon has Risen (1955), and Tanaka paid tribute by introducing characteristic features of the master, such as the fixed frontal shots of characters from a low height (“tatami shots”). However, from her third film, The Eternal Breasts (1955), Tanaka began to rely more on other women: screenwriters like Sumie Tanaka, writers like Yana Masako, producers like Hisako Nagashima, and historical characters such as Hiro Saga (The Wandering Princess, 1960).

Their protagonists attempt to live according to their own ideas and find a place in a society focused on the interests of men. Without deviating radically from the contemporary concepts of gender, Tanaka offers alternatives to the stereotype of the vulnerable and self-sacrificing Japanese woman that directors like Mizoguchi had idealised. They are women who fight against adversity because of principles, for survival, for love or desire, but they are never helpless victims.

Tanaka explored topics such as female sexual desire, motherhood, and violence and sex between women. Her portrayal of breast cancer in The Eternal Breasts is surprisingly explicit and pioneering in addressing the psychological and emotional challenges that the disease involves. Girls of the Night (1961) tackles sex work after Japan made prostitution illegal in 1956 and this clearly unresolved problem was largely forgotten about.

For a long time, Tanaka’s films were relegated to a hidden corner in the Japanese archives. In recent years, however, initiatives such as those of the Spanish Film Library in 2016 and the Locarno International Film Festival (2021) have sought to give her work the international recognition it deserves. But it is still extremely difficult to gain access to her films, so it is a pleasure and a luxury to be able to enjoy these three films, subtitled and in 35 millimetres, in the Tabakalera cinema.