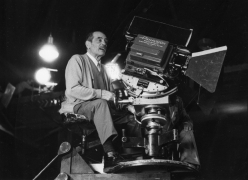 Next Wednesday 6 January marks the start of the NOSFERATU cycle in Tabakalera in honour of the Spanish film maker Luis Buñuel (Calanda, Teruel, 1900 - Mexico City, 1983). The cycle kicks off with screenings of his first two films: Un Chien Andalou (1928) and L'Age d'Or (1930).

NOSFERATU is brought to you by Donostia Kultura, the Basque Film Archive, Tabakalera, Elías Querejeta Film School and the San Sebastián International Film Festival, in collaboration with the Valencian Institute of Culture - Valencian Film Archive and the Bilbao Fine Arts Museum.

This retrospective brings you Buñuel's complete directorial work – comprising 32 films – throughout the year 2021. The programme includes a further 13 Buñuel + PLUS sessions with films linked to various aspects of the life and work of this Aragonese film maker.

The cycle is complemented with the publication of two books on Buñuel – one in Spanish, the other in Basque. The first, Luis Buñuel, constitutes no. 17 in the Nosferatu Collection. It has been coordinated by Jesús Angulo and Joxean Fernández and will be released in January. The second, Harkaitz Cano, is no. 9 and will be published in the spring.

Luis Buñuel was unquestionably one of the greatest, most admired directors in the history of cinema and an influence on generations of film makers. Most of his 50-year career took place in France and Mexico with some (notable) forays into Spain. Throughout this time he created a legacy of 20th-century classics including Viridiana (1961), The Exterminating Angel (1962), Belle de Jour (1966), Tristana (1970) and The Discreet Charm of the Bourgeoisie (1972).