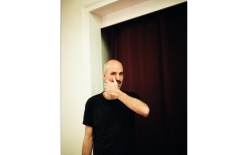 Bodies lost in the night.

The name Patric Chiha (Vienna, 1975) resonated strongly in our plans last year as we put together the FASSBINDER + PLUS focus. His film Brothers of the night was reminiscent of the feel of movies as Querelle (R.W. Fassbinder, 1982) and of the legacy of ground-breakers such as Pasolini, Kenneth Anger and Jean Cocteau.

This complete retrospective looks back at his short, medium and feature length films and is a sample of a career that has a firm presence at important festivals including Venice and Berlin. Ever since Casa Ugalde (2004), his first short film shot in 16mm, was screened at the Belfort Festival, his work has been a constant on the international circuit: in 2009 he released his first feature film Domain at Venice, starring the cult actress Béatrice Dalle, and has been a steady presence ever since at Berlinale where, in 2016, he presented Brothers of the Night.

Patric Chiha is all about direct movies, documentaries, fictional works, and observing movement and the sensuality of skin, as demonstrated in his latest work of pure choreography If It Were Love (2020). Based on the stage piece Crowd by Gisèle Vienne, it won the Teddy Award for best documentary at Berlinale 2020.

We talked with him about film, theatre and fashion, the night and cinemas in Vienna, about bodies in motion, the sensitivity of skin, about Proust and Paul Valery, Buñuel, Dereck Jarman, and of course, Fassbinder.

Born in Vienna in 1975, Patric Chiha studied fashion design in Paris and film editing in Brussels at the INSAS Film School. You could say that film led him to fashion, and that fashion brought him back to film. ‘When I was a teenager, I always dreamt of leaving behind the grey, sad city of Vienna to be a fashion designer in Paris. The biggest cliché. But later on I discovered that fashion was a self-centered fantasy world, and that my interest in fashion came from my love of film, from when I saw Buñuel's Viridiana for the first time, the films of Dereck Jarman or Paris is burning by Jennie Livingston in cinemas in Vienna, from my desire to connect with different realities, from my fascination for how emotions surface through the skin on screen.

‘The only way to reach the deepest part of man is through the skin, and this is what the film maker can capture. Like in Fassbinder’s films, emotions always surface behind beauty or even behind the toughness of the character’s skin’.

Patric Chiha stands for cinema based on the observation of movement and the sensuality of skin. Cinema of the body, to be precise. Bodies dancing at a rave in slow motion, bodies playing a role in a nightclub or bodies that walk differently depending on whether they are together or separate. Physical presences that transmit much, but not everything.

Chiha makes reference to Proust's novel In Search of Lost Time, when Albertine sleeps and the narrator watches her, wishing he could decipher her dreams.  ‘He never worked out what she was thinking. All he could do was watch her and imagine. This is what I do when I film somebody’.

This, precisely, is what motivated him to delve into the Viennese night to film Brothers of the Night.  I never intended to make a film that dissected or explained male prostitution. I simply wished to portray how these boys deal with reality, their lifestyle that so moved and shook me: how they move, talk, lie, dress and act’.

“In the case of If It Were Love, Gisele invited me to the premiere of Crowd and the piece had a huge impact on me. I was in the front row. The performance was unfathomable and I had to edit it live while the characters danced. It's such an open piece that once you immerse yourself, it carries you away. I thought about an adaptation for film that would reflect those amazing emotions. Highly ambitious, and yet highly simple’.

So it was. Chiha exhibits total freedom as he records the rehearsals, Gisèle Vienne directing, the 15 dancers on the stage, images of backstage, and builds a hypnotic spectacle that slowly takes shape. In this long night of romance and sexual tension the actors dance and breathe at the same pace, attracting and repelling one another.

Patric Chiha once again plays with the characters’ body language and with the lighting to create a full-blown cinematic experience. This style was already recognisable in his feature debut, Domain, an intimate film about a young man's process of personal growth, about his perverse relationship with his aunt (played by Béatrice Dalle), and about walking. The best film of 2009, in the words of John Waters.

He acknowledges that his style has undergone a transformation, as we will see in this retrospective: from the absurd and melancholic comedy of Boys like us (2014) – Chiha admits a weakness for comedies – and from the introspective journey along the roads and through the forests of Austria in Home (2006), to stories arising from a photo album and some written into his first medium-length films Casa Ugalde (2004) and Die Herren (2005).

‘When I look back at my career, I notice that in my first films I wanted to express and show my world. Now, on the contrary, I’m interested in showing different realities from an observer’s perspective. Now, I want to get lost’.

‘All the world's a stage, and all the men and women merely players’. With this quote from Shakespeare, he presents his carte blanche and the film entrusted with bringing his restrospective to a close: Simone Barbes or Virtue by Marie-Claude Treilhou (France, 1980), which opens with a theatrical scene in the hall of a porno cinema. ‘One of the most beautiful films about desire and the night that I've ever seen, a film about the disappeared Paris of the 1980s, a film that remained secret until its late restoration’.  It invites the viewer to lose themselves in a long and aimless night – an idea permeating all of Patric Chiha's films.

As Chiha himself alluded, this idea will also be part of his next project comprising a free adaptation of the novel The Beast in the Jungle by Henry James. ‘One man and one woman, the same club, over 25 years. A story of fantasy and reality, of love and tragedy’.

Bodies moving through another long night.