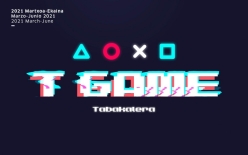 T Game is a Tabakalera project that will address the presence and ramifications of video games in our society through quite different activities and postures.

The eruption of video games in our lives is unstoppable, and they don’t just occupy our leisure time. Key aspects of this industry, like game mechanics and gamification, audiovisual aesthetics, recreated worlds, and developed technologies, are filtering through into unexpected areas such as the economy, leisure, education, health, film, and social networks.

There is a two-way relationship between contemporary culture and the video game sector. No industry generates more employment in the creative sector: here numerous composers, designers, artists, and scriptwriters have found an environment for professional development, while others use the same tools to critically subvert what this industry represents. Offerings are being developed that range from escapism to the most critical confrontations with our reality, from isolation to playing and working via networks, and from physical exercise to the virtual space.

To address these themes, Tabakalera is proposing a series of offerings developed through different departments. There will be a space for reflection and debate through the International Video Game Seminar “Una realidad videoludificada. La importancia social del videojuego en la sociedad contemporánea” (A video-gamified reality. The social importance of video games in contemporary society) directed by Daniel Muriel, Doctor of Sociology and one of the leading experts on the relationship between video games and society. This seminar will take place between 28 and 30 April.

From 25 March to 16 May, Lau Pareta Hall will house the Bideo-jokoak. Play Without End exhibition, with works created by artists that have used video game mechanics and aesthetics at a given time to think about the contemporary world, exploring its artistic dimension as well as its cultural and political possibilities. There will be a virtual meeting from 1 to 5 June. This project arises from a work group coordinated by artist and theorist Luca Carrubba around digital culture and video games. The event will address virtual spaces as a place for social interactions as well as cultural practices and artistic experimentation, presenting some of the non- physical forms of relationships and realities mediated through the digital world. It will take place in an exclusively virtual space that we will be able to experience through our own avatar.

In addition, places for play in different Tabakalera spaces will be enabled throughout the project, and Medialab workshops will be offered on virtual environment design and creation, among others. Tabakalera will offer this programme from March to June, and invites all types of audiences of all ages and levels of fandom to come participate, share, reflect, and of course, play.