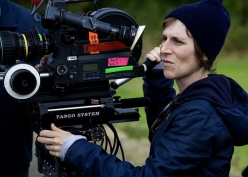 It was the 1970s, and Kelly Reichardt remembers Miami being a city filled with police. Television series showed crime scenes, flamingos at sunset, and convertible cars (Miami Vice), yet the life of a young woman with artistic yearnings was just as boring as in any other place at the edge of the world. In this sense, the photography classes and the developing lab's red light became a stronghold and incentive to run far, far away, to places where things, and life, supposedly happened. New York, for example.

A very young Kelly gets in the car and spreads out a road map on the dashboard. She sets off northbound on Interstate 95, passing through ever-colder forests and fields. Nature and landscapes will later play a role throughout her film catalogue, which leads us to understand this first journey as an initiation, like a first film that will later be revealed in all of her work.

Let’s now imagine New York through her car window. Kelly Reichardt observes the skyline and keeps driving, accelerating even, until she has left the skyscrapers for Boston, 211 miles north. Sometimes destiny has other coordinates and times in mind.

There she settles in and discovers film, first through night classes at MassArt, and then at The Museum School. Discovering film means discovering its tools and names: celluloid, Bolex camera, the Super 8; Fassbinder, Fellini, Buñuel, Kurosawa. And then, filled with all of these images, Reichardt moves to New York in the summer of ‘88.

We now enter into a period that we could call “underground and friendship”, two of the hallmarks that will stay with her from then on. Independent film was film that didn’t have financial backing, film made with friends, film akin to bands playing night after night in a bar with no emergency exit. Reichardt worked several jobs to pay her rent at the end of the month, filming on a tight budget with emerging directors. That is when she met Todd Haynes. That is when she worked on the art team for his film Poison (1991). That is when she met producer Ted Hope, who had launched the production company Good Machine, whose payroll included names like Ang Lee, Todd Solondz, and Claire Denis. That is when the world of bands like Sonic Youth (Reichardt worked in the gig scene at The Labor Board venue at 611 Broadway) mixed together with the world of indie film, a new energy that would revolutionise the 1990s. That is the moment when the Sundance film festival became the new Mecca.

Reichardt's first film (River of grass, 1993) was released at the Sundance film festival, where else? The Director recalls the train trip from New York to Utah taking five days, because the tracks had frozen. On the road again, the trains, stations, distances, and urban landscapes transforming into wild nature.

More than ten years would pass between her first film and her second full-length feature film (Old Joy, 2006). That was the thing about being a women and making independent film, there was no certainty that she could continue working.

During that time, Kelly wondered from one house to another, sleeping in friends’ apartments, filming a medium-length film on a Super 8 in North Carolina (Ode, 1999), followed by two shorts (Then a year, 2001 and Travis, 2004), works that are considered to be part of her training as a filmmaker. She also began working as a professor at Bard College, an art school with views of the Hudson river and the Catskill mountains. Reichardt once said that teaching is her way of learning about film. She is one of those professors that revisits films over and over again, asking herself where the camera is, and why is it there.

The year 2006 was another of those key moments in her journey. Here we must now cite a writer friend that would become an accomplice throughout her entire career as a filmmaker: Jon Raymond, novelist and writer of short stories set in Oregon, and screenwriter for a great many of Reichardt's films: Old Joy (2006), Wendy and Lucy (2008), Meek's Cutoff (2010), Night Moves (2013), First Cow (2019). This is the moment when the modernist coast of Miami and the grunge rhythm of New York would give way to the American West; to rocky landscapes, mountains, and the forests of the Pacific Northwest.

This is also when Kelly Reichardt began incorporating the literary tradition of contemporary North American novels and short stories into her films. True fiction, attention to detail, characters seeking their destiny in the middle of a limitless landscape, friendship as intimacy, intimacy as the road, the road as dialogue, dialogue as images, images as windows, windows as biography, biography as film, film as writing, celluloid (16mm and 35mm) as calligraphy, and calligraphy as the backside of the postcards that Reichardt had written over the course of her 27-year career, in each of her seven full-length feature films:

“The journey continues. We’ll see each other very soon. Yesterday I saw an incredible sunset. I won’t forget you. KR”.