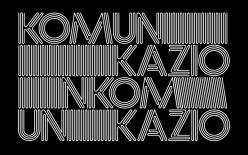 This exhibition has as its starting point the work Lekeitioak by the Basque singer-songwriter Mikel Laboa (1934-2008). Placing this series, which began in the 1980s, at the centre of the exhibition, it proposes a crossover between different fields of work based on the communication-non-communication binomial. The “Lekeitios” are artefacts in which the division between popular culture and the avant-garde is diluted and formal concerns and they refer to long-standing formal concerns and deviations: the play between tradition and translation, the mixture of multiple sound and musical registers by means of state-of-the art procedures such as editing, or the exploration of the inflections of language and gestures.

Beyond the artist’s creative nature or the interest in placing his legacy within a specific reading space, the project aims to make the form lekeitio a working tool. The works in the show consider folklore and popular culture as changing and transforming forms, at the same time exploring the power relations established by the machinery of language with the surrounding world. They warn of the capacity of their categories to modulate what we hear and see and they seek for correspondences between the known and the unknown, territory and psyche, art and nature, insofar as ideas that are constantly whirling in the whirlwind of words.

With the aim of exploring all these regions, the exhibition Komunikazio-inkomunikazio presents archives and historical documents, historical and contemporary works in intersection with new productions commissioned by Tabakalera. The works are presented in seven sections shaping a landscape where the sound, the visual and the textual register are overlapped. The traces of historical transformations are latent in this journey. Lekeitio and Gernika. Sound and sense. Communication and non-communication. Popular and elitist. Individual and common. The language wars are certainly never-ending.