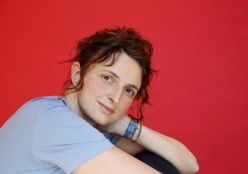 Alice Rohrwacher says she likes to end her films with images with which she could start a new one. "I like films where the ending and the beginning are somehow similar because they have a similar energy, and that's the moment when I feel like I can let go of a story."

Stories that call for other stories, such as the tales that shape oral traditions. It is hardly surprising, therefore, that Rohrwacher also has a very clear idea about the beginnings of her films. The three feature films she has directed so far begin the same way: at night. The night is the time to tell stories. Also from personal memories. With her family divided between Italy and Germany, Rohrwacher remembers long road trips at night during which, through the sounds, she tried to imagine the invisible landscape they were passing through. And it is there, in the imagination, that the director wants to establish the first link with the viewer.

So, let us go back to the beginning.

Rohrwacher (Fiesole, 1980) studied classical Greek, History of Religions, Literature and Philosophy. Her first approach to the cinema was through the documentary, but she immediately realised that there was a violence in filming people being themselves, living their own lives. The producer Carlo Cresta-Dina, after watching a short four-minute documentary by the director, encouraged her to write her first fiction feature film: Corpo celeste. She recalls that, as she was writing, she was constantly haunted by a question: Who will direct this story I am writing? When she understood that the proposal consisted of directing the feature film herself, she tried to join a film school – any film school! – but without success. Corpo celeste was therefore a risky venture: shooting a feature film without any previous experience or training.

But it was a success. So much so that Corpo celeste premiered at the Cannes Directors' Fortnight in 2011. And in some way, Cannes was to become the director's home. It was also where she premiered her second feature film, Le meraviglie, in 2014, and this time she also won the Cannes Grand Prix. With the recognition of the most important film festival in the world, Rohrwacher's rise was meteoric: in a very short time she went from shooting a film for the first time to becoming one of the most highly regarded contemporary directors in the world. Her last feature film to date, Lazzaro Felice, also, almost inevitably, premiered at Cannes, and it was another occasion on which Alice Rohrwacher did not leave empty-handed: she won the Best Screenplay Award.

If we had to choose one word to define Rohrwacher's filmography, perhaps it would be fable. Her films have a unique ability to construct fictions and immerse audiences in them. A pact of imagination to which the viewer surrenders without resistance. Her fictional journeys are sustained by a painstaking formal construction: the delicate image, always in super 16mm and shot by the cinematographer Hélène Louvart; the meticulous treatment of sound; the coexistence of professional and non-professional actors; and the locations and sets. Like fables, however fanciful or contrived, after having carried the viewer to the end, Rohrwacher's films always end up confronting reality. Like a story whose ending is intertwined with the beginning, in her escape from the documentary through the tools of fiction, Rohrwacher never fails to interrogate the complexities of reality.