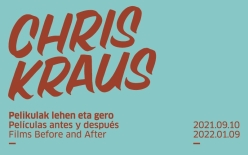 Chris Kraus (United States, 1955) is a cultural icon who has influenced several generations through her books and texts, as well as through her approach to art and film. Kraus started her cultural production with a series of films made mainly in New York during the 80s and 90s. These films were a complete disaster in their distribution and presentation, but became the best starting point for her to access literature. Her books are in a continuous dialogue with her films.

The Chris Kraus: Films Before and After exhibition presents the complete filmic production by Kraus, together with some examples of her crossovers between film and literature. Likewise, it proposes a review of her filmography, which is still relevant despite the passing of time, thanks to the use of performative situations, the juxtaposition of layers of language, the combination of references, the recourse to and the consideration of the intimate as literary material, and the collective process as the driving force for production.

Chris Kraus is a hugely important reference in art and literature. Writer, publisher and art critic, she has published novels such as I Love Dick and Torpor, among others, and books on artistic and visual theory such as Video Green and Social Practices.

Chris Kraus. Films Before and After is a co-production between Tabakalera and the Index Foundation in Stockholm.