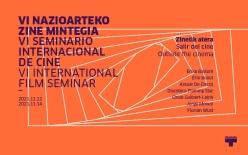 What image comes to mind with the phrase "Outside the cinema"? Maybe it's a couple coming out of a movie theater. It is raining and they will open their umbrella. One of them will light a cigarette. It is dark. It is already dark. The movie they have just seen will continue through the streets of the city.

Maybe it's not a couple. Only a girl comes out of the cinema. And it's not nighttime. She has just come out of an early evening screening at a festival. She'll put on her sunglasses so the light won't bother her.

Maybe it's neither a couple nor a girl. Maybe the one coming out of the theater is the movie itself. For example, instead of being screened in a movie theater, it is screened in an exhibition hall. Is a film still the same film, if the place where it is screened changes?

Or maybe we are referring to language when we talk about cinema. What is it that defines cinema, and what does it mean to get out of it? Perhaps we are talking about dispensing with conventions: a dark room, the spectators in their seats, a projector, 3, 2, 1, a film, at the end the lights come on and we go out into the street.

The starting point of the VI International Film Seminar is the exhibition curated by Florian Wüst, Zin Ex. Body and Architecture. The exhibition has led us to the phrase, "Outside the cinema", and we will spend two and a half days thinking about it, together with six guests: film theorist Erika Balsom, film theorist and filmmaker Érik Bullot, artists Anouk De Clercq and Discoteca Flaming Star and filmaker Jorge Moneo. We will do it through performance, conferences, interviews and films.

Let's see what image comes to mind with "leaving the cinema" after sharing the VI International Film Seminar.