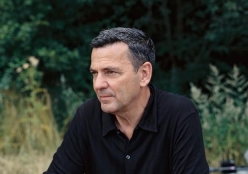 Christian Petzold (Hilden, 1960) says that in order to write the scripts for his films, he usually has some photographs in front of him: of the places where he will film and the actors and actresses he will work with. It is always interesting to know how films start to materialise. How ideas in a director's head become a film.

He also says that his connection with cinema started through reading, and always mentions Hitchcock/Truffaut by François Truffaut as a fundamental book. Petzold studied at the German Film and Television Academy Berlin (DFFB) where, among others, one of his teachers was Harun Farocki, who became his mentor and later, his collaborator. Many of Petzold's films are written by both of them.

The director is part of the New Wave of German Cinema alongside Angela Schanelec (to whom we dedicated a retrospective in 2019) and Thomas Arslan, and the second generation comprised by Valeska Grisebach, Ulrich Köhler or Maren Ade.

In 2012 he won the Silver Bear for Best Director at the Berlin International Film Festival for his film Barbara. To date he has made nine feature films. One of the characteristics of his filmography is that some of his films form trilogies. The first trilogy, Gespenster (Ghosts in German) is comprised of his first feature film Die innere Sicherheit (2000), Gespenster (2005) and Yella (2007). His most famous trilogy focuses on the topic of love in repressive systems and is comprised of Barbara (2012), Phoenix (2014) and Transit (2018). His latest feature film, Undine, featuring Paula Beer who won the Silver Bear for Best Actress at the Berlin International Film Festival, is also the first film of a new trilogy.

“When I make films I usually think in terms of trilogies. When I prepare a film I always think about the next two that I'm going to make. Harun Farocki always advised me to think about shooting trilogies to have something to work on, to work, to work... Like in the 40s and 50s, when filmmakers shot one film after another and used to have quite substantial links between them. My last trilogy, for example, which included Barbara, Phoenix and Transit, depicted love stories in oppressive systems: Barbara was the love of a woman behind the Iron Curtain in communist Germany. Phoenix placed a woman in National Socialism. And Transit had two protagonists running away from France at war. Now, with Undine, I'm starting another trilogy of German stories that focuses on the elements: water is the protagonist, and in my next film, fire will be the protagonist.”

Tabakalera's cycle will be completed with a conference by Volker Pantenburg from the Harun Farocki Institut, who will explore in more depth the relationship between Petzold and Farocki, first as student and teacher, and later as friends and collaborators. In addition, the film Transit by the German director is an adaptation of a homonymous book by Anna Seghers written in 1944 and which has another film adaptation made in 1977 titled Fluchtweg nach Marseille (Escape Route to Marseille), directed by Ingemo Engström and Gerhard Theuring, completing the cycle.