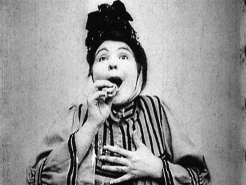 All histories have a beginning. But there is not a sole history. When they are narrated, histories are created word by word. Film by film, in the case of the history of cinema. And, just as all histories have a beginning, all cinema histories have a first film. In many historic reviews of cinema, that first film is usually La sortie de l'usine à Lyon (Workers Leaving the Lumière Factory in Lyon)by the Lumière brothers. The beginning that we propose in this film cycle is also in 1895 and in a closed screening of the same movie. But we invite you to change your view and discover one of the spectators sitting in the audience: Alice Guy. A year after that session, Guy was to direct what is now considered to be the first fiction film in the history of cinema. She was there from the beginning and, for that reason, we want her to be our beginning. The rest of the journey will be alongside other female directors, accompanied by women's voices that will gradually construct this historic review of feminist films. A possible history, amongst many.