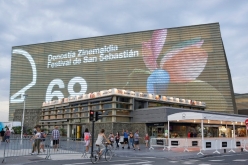 Cinema lives in Tabakalera 365 days of the year. San Sebastián is a 12-month-long festival.

Zinemaldia is Basque for ‘time for film’ – a time no longer limited exclusively to the nine-day event held in San Sebastián in September.

During these turbulent times, when both the movie industry and film contests are transforming and trying to find their place, many festivals are questioning how to shape future events. The San Sebastián International Film Festival has taken the strategic decision to hold a year-round festival. This, among other things, is what makes this contest unique: the possibility of holding the festival throughout the year and of following the projects and the film makers year-round, thanks to the member institutions located in the Tabakalera building.

Nowadays, the festival is about much more than screening, showcasing and promoting films.

In addition to the usual 12 months’ work of selecting films and collaborating with other festivals and programmes, the festival has brought in the Ikusmira Berriak residency programme for cinematic projects, founded and engaged with the Elías Querejeta Film School, created the Thought and Debate area of the festival, set up the Zinemaldia 70: All Possible Stories archive project, participated in various cinematic publications and research such as the Zine journal, and organised a programme of screenings on Tabakalera’s shared screen.

The festival will be taking a more active role in the shared screen and will put on a monthly programme via a spotlight titled Zinemaldia + PLUS. October and November will look back at the earlier short films of several female directors who won awards at the 68th festival, followed by public programmes with links to research for the Zinemaldia 70: All Possible Stories project, dialogues with the work of the Ikusmira Berriak residents, and carte blanche for the personalities who come to share knowledge and experiences on the Festival Under Construction course delivered by the festival team at Elías Querejeta Film School.