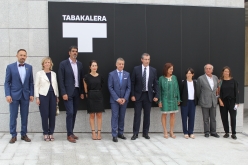 Two days before it opens, which will take place on Friday, Tabakalera was officially presented to institutional representatives, a broad cross-section of cultural stakeholders and the media thisafternoon. Nearly 150 guests were present in total.

Lehendakari Iñigo Urkullu, the Basque Premier, was at the ceremony, along with the highest institutional echelons.   The Lehendakari was accompanied in the official photo by the  Tabakalera Cultural Director, Ane Rodríguez Armendariz, the Speaker of the Basque Parliament, Bakartxo Tejeria, the Chairwoman of the Gipuzkoa General Assembly, Eider Mendoza, the Basque Government’s Minister for Education, Linguistic Policy and Culture, Cristina Uriarte, the Chairman of Gipuzkoa Provincial Council, Markel Olano, the Mayor of Donostia / San Sebastián, Eneko Goia, Denis Itxaso,  as  Chairman of the Executive Committee for the refurbishing of the building, and  Jon Montero, the project’s architect.

The official photo was taken outside the new Tabakalera entrance in Plaza Nestor Basterretxea, a newly-built square. This square is the outcome of a far-reaching urban remodelling project, which has managed to revitalize and turn the underpass linking the city centre and the Egia neighbourhood into a space for public use. Once Tabakalera is open to the public, this new access will be the main entrance to the building, even though the old one in Calle Duque de Mandas will continue to be used.

Prior to the start of the ceremony, there was a brief visit to the area called “Bodega”  [Cellar]. This space is located next to this new entrance and retains the structural characteristics and elevations of the original building. It will be used to host creative projects related to the memory of the building itself and of the people who inhabited it down through the decades. The space will premiere with the Mañana-Goodbye project, in which a group of the factory’s “cigarreras”, the women cigarette-rollers, have been involved. Leire San Martín, head of the Mediation Department, presented this project.

The ceremony was opened by Tabakalera Cultural Director, Ane Rodríguez Armendariz, who was obviously moved as she welcomed the guests and stressed the importance of such a long- awaited moment both for the city and for the territory. She then provided an overview of the cultural project that is about to get underway at its permanent location. There are four lines of action underpinning the cultural project: contemporary artistic practices, the mediation project, Hirikilabs – technology and digital culture laboratory, and Ubik – Tabakalera creation library. She also outlined the cultural activities that will take place during the coming weekend. Urko Aristi was the master of ceremonies and Denis Itxaso, the architect Jon Montero, Eneko Goia and Markel Olano spoke during the event. Lehendakari Iñigo Urkullu brought the proceedings to a close.

Once the ceremony was over, the people who had made speeches, along with the Minister, the members of the Tabakalera Board of Directors and the five representatives of the social institutions (San Sebastián Film Festival, the Basque Film Library, Zineuskadi, Etxepare Basque Institute and the Kutxa Foundation) set off on a guided tour of the building. The members of the Tabakalera team themselves were tasked with showcasing the cultural project, in the spaces in which it is going to be implemented. These included Victor Iriarte, head of audiovisual programmes, in the screening room; Anna Manubens  and Soledad Gutierrez, the curators of the Contornos de los audiovisual.  Puntos para un movimiento que rodea exhibition in the exhibition room; Arantza Mariskal, its head in the Ubik – creation library;  Diana Franco in Hirikilabs, and Ane Aguirre in the creators space.  The Tabakalera team also offered the same tour to the other guests.

The tour ended in the prism crowning the building, where refreshments were served. Tabakalera will open to the public on Friday 11 September. After a short ceremony scheduled to begin at 6.00 p.m., the general public will be allowed in to discover the different spaces of the building. An extensive programme of activities, including performances, tours of the building, musical performances, etc. has been organised for that day. A programme brimming with activities for everyone has been organised for the following days, on Saturday and Sunday.