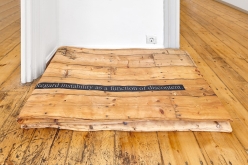 The Exhibition Une musique intérieure questions our conduct, our language, and our voice as one would the balance of our inner ear; as instruments that stabilise our intimate relationship with the outside world.

The performance of Solo - Nature Study Notes - 1969-2019 [Athens Version] 2021, which marks the beginning of this exhibition in the Basque Country following its presentation in Athens, questions the relationship between individual and collective memory from a new point of view for the Donostia-San Sebastian iteration. The performance, augmented by the presence of other works and artists' interventions, urges the audience to find a relationship to its own inner music. The itinerancy of this collective work becomes the lever to problematise the framework of its reception.

The exhibition at Tabakalera calls on the scores of composers who were pioneers in their attention to contexts, such as Alvine Lucier (Chambers, 1968), Pauline Oliveros (Deep Listening, 1989), and Milan Adamciak (Floor scores, 1967). As Erik Satie already emphasised in his Musiques d'ameublement (Carrelage phonique, 1917), interiority is colonised by social rules. The exhibition is presented to the public as a chamber concert. Through the artists’ work, its purpose is achieved on the political plane of determinism and in the use of instruments—both as musical instruments and tools of manipulation—played by local artists such as Amable Arias and a new generation of artists such as Eva Barto, Mattin, Matthieu Saladin, and Cally Spooner.