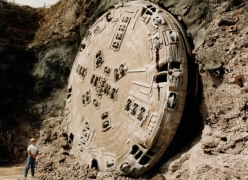 During their residency with Tabakalera, Erik Blinderman and Lisa Rave will be further developing a film entitled Americium.

Taking its title from the man-made and radioactive element on the periodic table, Americium examines the cultural and social implications of radioactivity on landscape reimagining it as a type of essence, or a spirituality within things. Relying on historical documents, the film will in part re-enact a meeting between international scientists (dubbed The Human Interference Task Force) tasked with developing a system of signs to communicate with generations 10,000 years into the future, the dangers of a nuclear storage facility in Yucca Mountain in the Nevada desert. Additional material will be shot on location with and within the various communities populating the American Southwest. Part science fiction and part documentary, Americium straddles between a mythical time and a looming future.