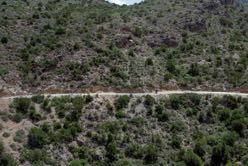 An offering from Leire Vergara

This seminar is dedicated to the introduction of the project Touch Devices: Curatorial Imagination in the Times of Expanded Borders produced in 2015 in collaboration with Trankat Résidence d'artistes en médina de Tétouan (Trankat art residency in Tetouan’s medina), which is part of the doctoral research of Leire Vergara within the Curatorial / Knowledge programme of the Visual Cultures department at Goldsmiths College, University of London. This seminar addresses the crossover that occurs between curatorial practice and academic research and has a number of guests involved in different stages of developing this research, who will give an account of marginalised spaces that emerge beyond this process.

The squares of sovereignty: an investigation curatorial in process

Leire Vergara will speak on his doctoral thesis dedicated to the study (from a curatorial perspective) of the squares of sovereignty, those Spanish enclaves dispersed across the north coast of Morocco and that operate as territories of excepcional nature across the history of the Spanish colonialism.

This seminar takes as model of production and investigation the project Devices of To touch: Curatorial Imagination in the Times of the Expanded Borders realized in Tetuán in 2015 to think of the artistic investigation out and inside the academic limits. From the different lived experiences and the diverse points of view of the invited artists will be debated on the limitations and possibilities that proposes for the artistic production a doctoral investigation based on the practice.