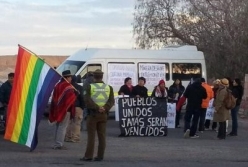 The need to intervene in medical knowledge was fundamental for people diagnosed early with HIV. The change in relationship between health, knowledge and power, which led to the first AIDS activism, is the starting point for this activity, which seeks to activate an exchange network between different forms of practical knowledge on the political management of the body.

The activity focuses on five sessions of conversation and debate on issues such as HIV/AIDS, ecology and food, functional diversity, the legal system and migration. Local coordinator of the programme: Josebe Iturrioz.

Apirilak 16, 5pm, Workshop Hall
HIV/AIDS
Guests:
-Christian Rodriguez: Chilean anthropologist and psycho-sociologist. Founder during the 1980s of the CEPSS - Centre for Public Health Policy Studies, in Concepción, Chile.
--Harribeltza: association founded in 1994 in the town of Oiartzun, Gipuzkoa, which works in the field of AIDS information and prevention.

May 27, 5pm, Workshop Hall
Functional diversity and non­regulatory bodies
Guests:
-Las Raras: an experimental research group based in Madrid made up of people labelled tullid@s (cripples), marica (poof), bollo (dyke), trans*, locx, etc.
-Elena Urko: activist with PostOp (Barcelona), a group which has contributed to the creation of transfeminism.

June 25, 5pm, Workshop Hall
Mobility of bodies / Immigration / Border management
Guests:
-Brais Varela: Member of the Red Cross in the Basque Country. He works with inmates at Martutene Prison and is an expert in Spanish immigration law.
-Salvamento Marítimo Humanitario (Humanitarian Maritime Rescue): a group of volunteers from the Basque Country who work to help refugees entering Europe along the Greek coastlines.