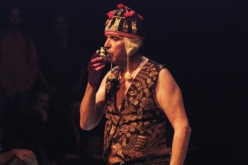 Performance programme that explores the body from "the gap between discourse and materiality" (Peggy Phelan), from strategies like the explicit body, animality as strength or the recourse to touch.

June 10, 19:00, Z Hall
Aimar Pérez­Galí, The Touching Community.
A system in collapse is a system moving forward is the prologue to the drama piece The Touching Community which investigates the parallel expansion in 1980s and 1990s of AIDS and Contact, the dance technique in which movement was improvised from physical contact between two bodies, in sharp contrast to the politics of immunity ushered in by HIV/AIDS. Aimar Pérez Galí's research focuses on Spain, contexts from Latin America and the US, and will take the specific form of a drama piece still in process.

There is only one rule: the consensus.

For the exhibition of been Anarchivo sida, Quimera Rosa proposes a performance that is articulated by the explanatory space during one afternoon. The public will be invited, in an individual way, to relate with unx of lxs two performers for an approximate duration of 10 minutes. The performance will mix own spaces of the center of art, of the darkroom, of the laboratory and of the clinic and will come into the relation with the rest of the exhibition.

The space S.I. is an intimate/public space. In a site isolated of the rest of the exhibition these two unknown bodies will establish a physical relation that, by means of electronic protheses connected to the bodies, was generating an audio-visual piece issued publicly.

The noise produced by the corporal electricity in traffic, is an incitement to hack the biodatas that try to install the clinic in every body.