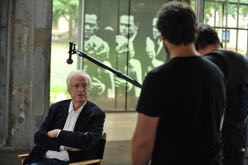 Bertrand Tavernier loves cinema. Along the lines of A Personal Journey with Martin Scorsese Through American Movies, Tavernier presents us with a sharp and personal approach to French cinema, the films, directors, composers and dialogues he has loved most in his life. From Jean Renoir to Claude Sautet, from Henri Decoin to Jacques Becker, casting an eye over François Truffaut, Jean-Luc Godard, Louis Malle and many other famous moviemakers on the way, Bertrand Tavernier treats us to a fresh look at the gems of cinema.

Bertrand Tavernier (Lyon, 1941), one of the great masters of French cinema, has enjoyed a long relationship with the Festival, which dedicated a retrospective to him in 1999, the year he chaired the Jury. His film Coup de Torchon was screened in the Official Selection in 1982, Capitaine Conan (Captain Conan) bagged a Jury Special Mention in 1996, Ça commence aujourd’hui (It All Starts Today) won the Audience Award in 1999 and Holy Lola landed the same prize in 2005, while in 2013 he returned to the Official Selection with the farce Quai D’Orsay, winner of the Best Screenplay Award. Some of his other international successes are L'horloger de Saint-Paul (The Clockmaker, 1974), Round Midnight (1986), La vie et rien d'autre (Life and Nothing But, 1989), La fille de d'Artagnan (Revenge of the Musketeers, 1994), L'appât (Fresh Bait, 1995) and La princesse de Montpensier (The Princess of Montpensier, 2010). The French historian and critic, president of the prestigious Institut Lumière in the city of his birth, presented at Cannes Classic his latest work, an expedition into the history of French cinema and a homage to filmmakers such as Becker, Renoir and Bresson, in which he has invested six years of work.