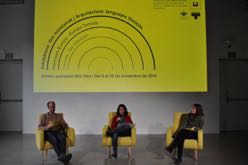 During this month of November San Sebastian will host the seventh edition of the Architecture: Film Languages programme.

The project, promoted by the Cristina Enea Foundation, Tabakalera and the San Sebastian 2016 Foundation and with the collaboration of Goethe Institut and the Kaxilda bookshop, seeks to explore one of the big categories of our time, the city, from the point of view of architecture and the visual and film languages used to approach different themes such as migration, the economy, austerity, inequality or climate change, among other aspects.

The sessions scheduled during the celebration of this programme (from 8 to 29 November) facilitate and promote a series of meetings with local and international thinkers -accompanied by screenings of films that the same authors propose-, with the intention of creating a reflective approach to urban policies and to a geographical territorial analysis. In this edition, the topic proposed for its analysis and reflection is “Europe taken over”, a variation on the story by Julio Cortázar called House taken over, in which Irene and her brother feel how the family home is being invaded by forces they are incapable of visualising, whose nature escapes them, but which effectively evicts them from their home gradually until they are definitively thrown out onto the street. Fear and anguish permeate the story, conditions that make it possible to establish many analogies with the moment that Europe is currently going through.

However, as opposed to the case in Cortázar's story, these forces are arriving to Europe, and which threaten the horizon of tranquillity, are identifiable, perceptible in the light of day. They are the spectres that appear in news bulletins, in political features, in literature, art and in the thought of, at least, the last two decades. They are the neoliberal politics of austerity and precariousness, in a predatory tendency after the “operation: crisis” that has accompanied the expansion of economic totalitarianism. It is the international security monitoring that has risen against migrations; Europe's immune armour plating in the face of a violent flipside in the form of wars and terrorisms, which has revealed the racist and colonial substrate of the old continent. It is also the expulsion of entire families and populations from their land due to ecological catastrophes, the construction of new infrastructures or the massive promotion of tourism flows and economic reconversion processes. All of these forces take over the region to re-produce it and make it profitable, or to destroy it. Displacement, eviction, expulsion, relocation and therefore the search for shelter become imminent given the evidence that our home -the Europe in which it was possible to project a supranational political experience- has been “taken over”.

For this year’s edition we have invited Gabriel Villota, Los Flamencos, Andrés Antebi and Daniel Malet and Isabell Lorey, with whom we are interested in discussing the practices and ideas which in their different fields of work they propose to develop in order to set out on an intentional exodus which can build spaces of resistance in which to create a democracy of the future, where taking over the home does not mean hostility but opening up a space of hospitality.