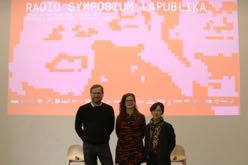 LaPublika culminates with a marathon of concerts, radio and conversations on public affairs

The LaPublika Radio Symposium will take place in San Sebastián on October 28th. This is an international symposium directed by consonni and produced by San Sebastián 2016 and Tabakalera.

The LaPublika Radio Symposium will take place in San Sebastián on October 28th. This is an international symposium directed by consonni and produced by San Sebastián 2016 and Tabakalera. It will include performances, concerts, conversations and sound installations, where the public can gain a better understanding of the forms in which art influences common affairs that affect us.

Tickets for attending this event in the Patio of Tabakalera and in Dabadaba, are now on sale through www.lapublika.org at prices ranging from 8€ to 20€.

Additionally, the symposium can be heard live through www.lapublika.org and on several radio stations.

On October 28th the LaPublika project culminates with an international symposium in the form of a festival involving performances, concerts, interviews, sound installations, activities in the city and international connections. It will last for over 15 hours and take place mainly at two scenarios: Tabakalera International Centre for Contemporary Culture and the Dabadaba concert venue.

LaPublika is a laboratory for artistic research on the public sphere that started in 2014. The project is directed by consonni, the Bilbao-based producer and publisher, and produced by San Sebastián European Capital of Culture 2016 (DSS2016EU) and Tabakalera International Centre for Contemporary Culture, with the collaboration of the Fine Arts Faculty of the University of the Basque Country (UPV/EHU) and the support of multiple organizations and institutions. This research laboratory, which as part of the programming of DSS2016EU is classified under Pagadi quay, is formed of two work and research groups, a radio-web with podcasts and a series of face-to-face activities. During 2014 a prologue was realized, and in 2015 there were three workshops, a seminar and an artistic intervention in consonni (Bilbao) and Tabakalera (San Sebastián). In addition, in June 2016, the Radio Magazine LaPublika was developed in the Azkuna Zentroa (Bilbao).

A symposium on how art influences the public sphere

After a three year itinerary, LaPublika will reach its culminating point with an international symposium that will take place on Friday October 28th. It will be developed, on one side, from 10.00 to 21.00 in the Patio of Tabakalera and, on the other, from 21.00 to 4.00 in the Dabadaba concert venue. During the daytime session, under the direction of the Catalan scenographer Alex Tarragüel, Tabakalera will be transformed into a radio studio that will be emitting the online broadcast with a live public. During the night, LaPublika will move to Dabadaba to continue its extensive program.

As if it were a festival, the symposium will be developed in an intense work day with over one hundred participants and dozens of activities. The program will pivot around art, the political and the common and will include activities that will encourage reflection on this question, such as conversations, debates and presentations, and other activities with a more performative character, such as artistic interventions, performances and concerts.

All of this will be presented in the format of a radio program in which the presenters will be Alicia San Juan, Goizalde Landabaso and Richard Huw Morgan. It can be followed live online through www.lapublika.org and live or deferred on numerous radio stations (Casares Irratia, TEA FM Zaragoza, Radio Euskadi, Rádio Manobras, Radio Estado Mental, La Radio Tomada, Radio Vallekas…).

Conversations and debates that encourage reflection

A substantial part of the daytime symposium will be dedicated to debating – from different standpoints and with professionals and artists from different fields – the forms in which art contributes to constructing the public sphere.

We will have the opportunity to hear the New York theoretician Rosalyn Deutsche and the Colombian artist Jaime Iregui, who are significant theoretical references when reflecting on the concept of the public sphere. Deutsche is the author of the text Agorafobia, on which this project has largely been built. For his part, in the year 2000 Jaime Iregui founded the space for online discussion www.esferapublica.org to debate and reflect on artistic activity and institutional and independent activities. There will be several two-way conversations, such as that involving the atypical singer-songwriter Niño de Elche and the writer Belén Gopegui, who have very different practices but hold points in common regarding the symposium’s general question of how art can represent the issues that affect us. Another of the outstanding conversations will take place between the artist Daniel García Andujar and WHW, the curatorial collective based in Zagreb and Berlin.

On the other hand, two research groups will make presentations of work related to the issues addressed by the symposium. This is the case of the Orea group, linked to the Fine Arts Faculty of the UPV/EHU, which will present its work Cómo tu abuela cambió tu vida (How Your Grandmother Changed Your Life), which reflects on collective wisdom, identities and memories. Similarly, the Pedagogías y Esfera Pública (Pedagogies and Public Sphere) research group, coordinated by the Hezkuntza department of Tabakalera, will present a series of activities realized over the last year with a group of teenagers from the Oianguren secondary school in Ordizia and students from the Architecture School of San Sebastián.

Several artistic projects will complete this multi-faceted reflection on how art contributes to creating the public sphere: the feminist podcast Sangre Fucsia and its radiophonic magazine El feminismo creativo tenía un precio (Creative Feminism Had a Price); the meeting of women artists (Olatz Otalora, Sahatsa Jauregui and Gentz del Valle) facilitated by the Okela  creative space in LaPribada; Mugatxoan and its Itzultzen ari gara, which uses the radio as a basis for developing the idea of “being on air”; Sra. Polaroiska, who in CHORUS. Y el coro concluye… (CHORUS. And the chorus concludes…) will perform the traditional function of the choir as the voice of the citizens; the interview and performance of the Saharan activist Aziza Brahim, who will perform songs from her new disc Abbar el Hamada (Through the Hamada); or the artist Oier Iruretagoiena, who will encourage us to reflect on the sounds that the city constantly transmits with his sound installation Aldez kontra. Societat Doctor Alonso and Moaré Danza will take us into the streets, and with their proposal La naturaleza y su temblor (Nature and Its Tremour) they will offer us a visit/stroll through the city, using as tools the theatre, the body, thought and cinema.

A moment for breaking schemes and moving your hips

The eighteen hour symposium will have moments with a more festive character, above all in the nocturnal part, which will take place in the Dabadaba concert venue.

For example, the experimental music of producer and artist Mutamassik, who will have spoken during the morning with the Canadian artist Michelle Terán, can be enjoyed from 23.00 onwards. Also in Dabadaba, the artists Los Torreznos will present their latest piece La Realidad (Reality) (2016) for the first time in the Basque Country and the second time in Spain.  And to end the fiesta, Tremenda Jauria will make us break our schemes and move our hips, and we will continue dancing with the DJs Gurebesta and Patty Hearst.

Tickets are on sale through the website www.lapublika.org and are priced between 8 euros and 20 euros, depending on whether you want to attend the full day’s activities or only parts. On the other hand, it will be possible to obtain the catalogue of the complete LaPublika project.

The organization is providing a free public transport service between Bilbao and San Sebastián to facilitate attendance at the event.

Anyone who wants to whet their appetite before the symposium can listen to podcasts of prior content on the LaPublika website. Likewise, you can listen to users’ answers to the question the project is organized around: How do artistic practices contribute to building the public sphere?

Moreover, on the online film platform Filmin, the project has opened a channel focusing on filmography that contextualizes many of the issues that the project works on. https://www.filmin.es/canal/lapublika