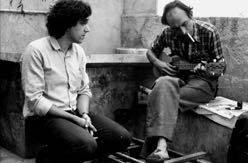 Open air cinema in the Attic

Cinemas outside the cinema: in the village square, in the park, in the forest, beside the sea, in a boat, in a Russian train, in the bus, in the cellphone screen, in a transatlantic airplane, in the Mojave desert, in a fronton, in the jungle, in the edge of a lake, in the Attic of Tabakalera, in the framework of UD-HA! programme. We are opening our open air cinema in San Sebastian, summer cinema, outside cinema, cinema from 22:00 on, during July and August, opencast.

By one hand, between July 8 and 10, connecting with our summer's exhibition by Yto Barrada, we have invited the Cinémathèque of Tanger to programme a series of Cartes Blanches.

On the other hand, every Friday fron July 22 and August 26, we have programmed a series called Last cry!, plenty of music, dances and songs and in their original version: Office by Johnnie To, Una jolie vallée by Gaël Lépingle, Phantom of the Paradise by Brian de Palma, among others.

When we first started thinking about the summer, this season was going to be called Cinturón negro de karaoke [Black Belt in Karaoke], in memory of the album by Javier Krahe. Then, we thought we might call it Último Grito [Last Cry], in tribute to the musical and television facet of our beloved Ivan Zulueta, because this was the title of the musical program of TVE where he worked in the late seventies.

But in the end, whatever it's called, we think our reasons for scheduling these films during July and August is obvious – we want music, we want singing and we want dancing at the launch of our open-air cinema in San Sebastian. Music and cinema, yes, but with our own special approach to programming. Is it possible to make a film on capitalist corruption in which the executives sing? Or a pastoral and choral adaptation of The Three Musketeers? Or a glam-rock remake of The Phantom of the Opera?

This is one of those films about a time when musicians travelled by train, guitar in hand. When they used to go touring the ‘provinces’. When they used to sing on the streets and restaurant terraces. Days of Bohemia. Of political chants and affiliation. A documentary portrait of a unique time and a unique figure – Chicho Sánchez Ferlosio, poet, mathematician, inventor, singer, reader and musician. “When I start singing / I don’t bid anyone’s leave”, he says in a one of the verses.

And without bidding anyone’s leave, talking to camera, talking and singing, we discover the life and work of this street singer (as he is listed in the final credits): his Marxist-Leninist activism, his trip to Albania, the prisons, the relationship between lentils and marihuana, the miners’ strikes in Asturias and his coplas as a way of saying things no one else dared to voice. If Jaime Chavarri’s El Desencanto (1976) served as a portrait of the end of the dictatorship, perhaps this second film by Fernando Trueba contains the keys to what is called the Transition.

But above all of this history with a capital H is Chicho, a genius and a character. And song, which is what you live.