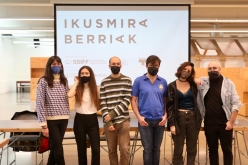 Ikusmira Berriak, the programme of residencies and audiovisual project development organised by the San Sebastian Festival, Tabakalera International Centre for Contemporary Culture and the Elías Querejeta Zine Eskola (EQZE), has increased from five to six the number of calls and this year, for the first time, those selected to develop their projects in San Sebastian will enjoy additional personalised tutorials by professionals including Elena López Riera, Jean-Gabriel Périot, José Luis Torres Leiva, Lucile Hadzihalilovic, Fernanda del Nido and Paolo Moretti. Thanks to this new feature and other measures promoted in recent years, Ikusmira Berriak continues its search for new talent, offering enhanced accompaniment to filmmakers from all over the world.

As announced in December 2021, the projects chosen for the eighth edition of Ikusmira Berriak are those of Ana Cristina Barragán, Jaume Claret, Meritxell Colell, Irati Gorostidi, João Paulo Miranda and Maximiliano Schonfeld, who, from March 14 and until April 24, will use their time in San Sebastian to work on the development of their projects-to-be. And on April 9 they will present some of their earlier works at a Zinemaldia + Plus showing in the Tabakalera cinema.

During this first stage running for six weeks at the Tabakalera Artists’ Space together with creators participating in other artist residencies, they will be given the necessary tools to start developing their projects. Each filmmaker will be accompanied by one of the three members of the committee of experts —Olimpia Pont Cháfer (film industry consultant), Javier Martín (consultant and member of the San Sebastian Festival selection committee) and Sergio Oksman (film director, producer and professor)— who will analyse their works in situ while giving them advice from a multidisciplinary point of view. As a new feature, this year the residents will be assisted by a tutor providing them with the personalised monitoring of each project, adapting to their requests and requirements through online sessions.

Thus, the director from Alicante Elena López Riera will accompany Meritxell Colell (Barcelona, 1983), selected in Ikusmira Berriak’s Spanish category to develop her third feature, Lejos de los árboles / Far from Trees. The French moviemaker Jean-Gabriel Périot will give his advice to Navarra’s Irati Gorostidi (Valle de Egües, 1988), who participates on behalf of the Basque Autonomous Community with her feature debut, Anekumen. The Argentine filmmaker José Luis Torres Leiva will mentor Ana Cristina Barragán (Quito, 1987), selected to represent the third round of students graduating from the Elías Querejeta Zine Eskola (EQZE) with La hiedra, while the French moviemaker Lucile Hadzihalilovic will do the same with Frankenstein by Maximiliano Schonfeld (Crespo, Argentina, 1982), selected in the international category. Also in the same category is the Brazilian João Paulo Miranda (Porto Feliz, 1982), who will work on Bandeira in company of the director of the Cannes Directors’ Fortnight, the Italian Paolo Moretti. Finally, the Argentine producer Fernanda del Nido will accompany Jaume Claret (Barcelona, 1998) as he develops Estrany riu / Strange River in the Nest category.

Given that screenwriting is one of the main tasks developed at the residency, Ikusmira Berriak will also offer the chance to attend a workshop by the screenwriter Fran Araújo. And in another online session the participants will receive information on the subject of grants and calls from Vanesa Fernández Guerra, consultant and director of the Zinebi Festival.

The San Sebastian Festival, Tabakalera and the Elías Querejeta Zine Eskola therefore continue to boost the Ikusmira Berriak residencies, which have grown in recent years as regards the number of residents, projects and resources. While in the first editions only four filmmakers were selected, the figure has risen to six for the eighth edition. Similarly, the residence time is also longer and now runs over a seven month period with an 8-week (previously six) stay split into two stages: six weeks in March and April, and two in September, coinciding with the dates of the San Sebastian Festival where the projects are shown to industry members at a more advanced stage.

For the last few years each resident has also received a development grant of €5,000 in June enabling them to continue to work on their project between the two periods of the residency. During this intermediate period they continue to receive online assistance from the committee of experts. Finally, the Irusoin production company gives the Irusoin Post-Production Award to one of the selected projects including post-production work on the sound, colour and graphics until obtaining a DCP master.

The residencies programme has continued to evolve as interest in the initiative grows, having risen from the 32 projects submitted for its first edition in 2015 to the 281 presented this year. Also following a rising trend is the number of participations and awards bagged by the projects at numerous international events. Amongst the most recent are El gran movimento (Kiro Russo, 2021), who participated in San Sebastian Festival’s Zabaltegi-Tabakalera section after winning the Special Jury Prize in the Orizzonti section of Venice Festival, also winning best director at the Bosphorus Film Festival. Eles transportan a morte / Ellos transportan la muerte (Helena Girón, Samuel M. Delgado, 2021), winner of a special mention in the Zabaltegi-Tabakalera section, also received the Award for Best Technical Contribution at the Venice Critics’ Week amongst several others, including Best Director at Cinespaña Toulouse 2021. In addition, 918 gau (Arantza Santesteban, 2021) won the City of Lisbon Best Film Award at DocLisboa 2021 as well as best Film in the TFFDoc / Internazionale.doc section of the Torino Film Festival and the Special Public Award and Special Jury Mention at the Punto de Vista Festival. Precisely, on April 3, Arantza Santesteban will participate in the Cine Hablado season with the screening of 918 gau at which she will explain how the film was made.

On the other hand, since last year, the monthly Zinemaldia + Plus focus makes the most of the start of the Ikusmira Berriak residencies to programme some of its protagonists’ former works. The Tabalakera cinema will therefore host, on April 9 at 19:00, the presentation by Schonfeld of Esnorquel (2005), while Colell will participate with Manuscrit a la ciutat / Manuscrito en la ciudad  (2006) and Barragán with show Domingo violeta (2010). For his part, Miranda will show A moça que dançou com o diabo (2016), Jaume Claret Ella i jo (2020) and Gorostidi will present Unicornio (2021).