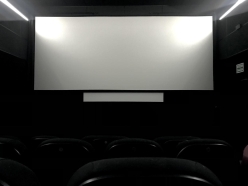 Following the beginning of Claire Simon's film series, we are launching a three-session course on contemporary cinema, with the aim of deepening in films created by women and, also, in order to create a space for dialogue. The course will be facilitated by Frauke Schulz Utermöhl.

Frauke Schulz-Utermöhl holds a degree in Pedagogy from the University of Hamburg and is a teacher. For more than twenty years she directed the Delegation of the Goethe-Institut, the German Cultural Institute in San Sebastian, until 2008. Since then she continues to collaborate with the Goethe-Institut in Madrid for the screening of German films at Okendo Cultural Centre.

Since its beginnings in 1987, she has worked at Gernika Gogoratuz, Centre for Peace Research and Conflict Transformation, as head of the area of education and training. She has participated in the Laboratory of the commons and Medialab-Prado to transfer the approaches of "Memoria y Procomún" workshop in Madrid to a workshop in the Basque Country and in the framework of the "Peace Forum" San Sebastian-Donostia as European Capital of Culture 2016. She is an executive member of Hebras de Paz Viva Association.