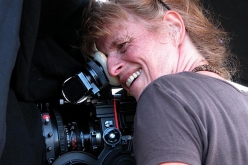 Lucrecia Martel, Teresa Villaverde, Angela Schanelec, Claire Denis, Kelly Rechardt, Lizzie Borden and Joanna Hogg are some of the film directors that we have spotlighted at Tabakalera. Through their work, these filmmakers have changed the history of cinema and cinematographic language itself. Through these Seasons, we have explored their complete filmographies and have always strived to round out these events with their in-person attendance. This April, a new name will be added to this list of deep-dives into singular cinema careers: Claire Simon.

This French filmmaker was born in the United Kingdom and champions free film with diverse formats and offerings. One of the main features of her filmography is that each film is a project in and of itself, quite different from the one that came before it. There is constant experimentation with cinematographic language. In fact, she is constantly attempting to break away from labels. She rejects the rigidity of categories such as “documentary” or “fiction”, claiming that what she makes is cinema.

Her latest full-length feature film, I Want To Talk About Duras / Vous ne désirez que moi, premièred in the most recent San Sebastian Film Festival’s Official Selection. Simon proposes a radical device that falls precisely in the complex threshold between what is documentary and what is fiction: we witness a conversation between actors Swann Arlaud and Emmanuelle Devos, interpreting the preserved sound recordings of an interview between Yann Andréa (Duras’s lover) and journalist Michèle Manceaux in which Andréa reveals the intimacies of his relationship with Duras.

Claire Simon began as an editor, and later discovered the possibility of filming herself. International recognition arrived with Récréations (1998), a shimmering work of film where the creator inspects a school yard, leading viewers to reflect on society’s forms of organisation. The camera records children's games and dynamics at the playground, presenting fear, joy, harassment, and violence.

Also of particular note is the diptych comprised of Géographie humaine (2013) and Gare du nord (2013), where the protagonists are France’s largest train station and passing individuals with diverse origins and stories. Once again, Simon unfurls a variety of cinematographic tools to address the same elements:  while the first film adopts a more documentary-like register, the second focuses on actors performing a work of fiction with the same protagonist space and a similar intention. As is the case with Récréations, these two films develop a highly-complex reflection on a concrete space, and the relationship that individuals establish with it and between each other.

During the retrospective, there will be two moments dedicated to discussion and reflection. On one hand, writer Katixa Agirre will present Mimi (2003) on 21 May. In this film, the space is Nice, and the individual is Mimi Chiola, a friend of Simon’s with whom the director will stroll through the city, as we slowly get to know her through recollections. We could say that another of Claire Simon’s hallmarks is the importance of observing and listening. This session will also be an opportunity to discover the relationship that is established between Simon’s film and the writer.

The second moment will be on 28 May, when we will welcome the filmmaker herself to lead a masterclass following a screening of Récréations.

Between the months of April and June, the screen of Tabakalera’s cinema will be transformed into the place to discover or rediscover the film work of Claire Simon. Film that is free and brave; a filmography that will lead us to reflect on individuals and the world around us and, above all, film itself.