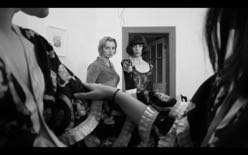 At the end of 2013, I embarked on The News audiovisual project.  In the spring of 2014, I was awarded the Eremuak grant from the ARTIUM art centre in Vitoria-Gasteiz to produce the first videos of the project.

At the end of June 2014, I ended the first episode entitled The News and after which the whole project is named. I wanted to recreate a surrealistic and comic news programme in that first episode. A news programme where the news is meaningless and the characters are completely absurd. I recorded and edited the second video, The Real Stardust Oil, between October and November of the same year. In The Real Stardust Oil, I use the format of a shopping channel commercial.  One of the main characters of Without Farewell is from The News, the project’s first film.

The News stems from the desire to experiment with the audiovisual medium, but addressing and rethinking the female roles in comedies are also very important in the project. I think it very important for me to address and try to break many gender clichés that are repeated again and again in films, and, above all, in comedy.

Without Farewell was entirely filmed in Berlin.  I was awarded a Basque Government grant for the production of an artistic project, which is now in the editing phase.