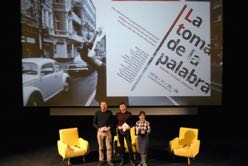 Film makers such as Pere Portabella and Isaki Lacuesta and speakers such as Susan Martín-Márquez, Masha Salazkina or Xan Gómez Viñas will take part in a symposium called The Capture of Speech. Dialogues with the militant film archive.

On 25 and 26 November Tabakalera's cinema room will host the symposium The Capture of Speech. Dialogues with the militant film archive. This event is part of the Europe, future past research project by Pablo La Parra Pérezproduced within the framework of the Artistic Research Residency 2016 set up by Tabakalera and Donostia/San Sebastian 2016, European Capital of Culture.

This programme is part of the Pagadi quay in the Capital of Culture programme and seeks to strengthen the artistic fabric and the inter-institutional relations of the cultural centres more involved in the support of contemporary art production, linking its contents to the commitments of current society.

The programme proposes a series of dialogues halfway between the audiovisual and the discursive, between theory and practice, between past and present, with screenings, debates and performances. The aim is to propose a meeting point to recover that spirit of critical dialogue. To capture the speech of the militant film archive to reflect upon the parts it followed in its dreams to link film and political struggle. But also to capture the speech from the present to see what can be done today with its legacy of images and words.

The programme will include roundtables, screenings followed by discussions and several performances. Access to the dialogues is free of charge and a general entrance ticket can be purchased for all the screenings (including lunch on Saturday for 15 euros), as can individual tickets (3.5 euros) through each screening on the website of Tabakalera.

Europe, past future is a project about resistant images. Images of resistance. Images which, from the past, participate in the creation of the present. It is a project that is part of an artistic research residency, which started in February and will extend until the month of December.

At a time in which neoliberal Europe is going through an unprecedented social and political crisis, several contemporary visual and artistic practices are turning back their attention to the militant film archive of the "long 1960s", the convulsive historical period which started with the international cycle of struggles of 1968 and their subsequent lives throughout the 1970s. The Europe, past future project aims to reflect on this trans-historical dialogue through research work and a public agenda of activities.

The Europe, past future project explores the transfers between the militant film archive and contemporary visual and artistic practices. It analyses in which way, during the current moment of crisis, various artists, film makers and audiovisual collectives transform and reformulate the legacy of the militant cinematographic practices of this period as a form of political intervention in today's reality. The legacy of militant film making from the long 1960s is revealed, thus, as a fundamental source to understand contemporary critical visual practices.