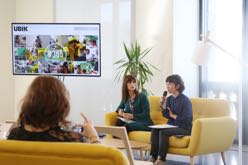 Tabakalera celebrates the first year of Ubik with a special programme.

It has been a year since Ubik,Tabakalera’s creation library, first opened its doors; a year in which thousands of people have made use of this unique place to create, learn and enjoy.

It has been a year since Ubik,Tabakalera’s creation library, first opened its doors; a year in which thousands of people have made use of this unique place to create, learn and enjoy.

Since the opening of the International Centre for Contemporary Culture, the Tabakalera cultural project had regarded the opening of its creation library as an important challenge. It was to be a new facility that would involve combining the typical services and tools of public libraries with resources and features that were, in principle, quite unrelated. Thus, for example, a single common space without compartmentalisation was considered; a space for all ages and intended for very different uses: from the viewing of films to reading or to a space dedicated to video games or digital technology workstations.

Based on this approach and after a year in operation, Ubik has established itself as one of the most lively and dynamic spaces within Tabakalera. Before it opened, it might have been expected that a space with such a range of resources, contents and proposals would attract many and very different kinds of people. And so it has been proved.

With the aim of publicising the creation library’s contents and resources and seeking to encourage the creative capacity and initiative of the users, one of the characteristics that make Ubik a special place is its programme of activities. It is a programme consisting mainly of workshops and meetings, which cover the wide range of subjects that the library addresses and its varied public.

Over the course of these twelve months 241 activities have been organised in Ubik, involving 3,497 people. Some of these proposals have already been consolidated as part of the stable and ongoing programming. Within this category are the HorKonpon repair workshops, which were started in conjunction with DSS2016EU, and which were moved to the library when Ubik was opened. It is a meeting that takes place once a month, on Saturday mornings, and where people of all types meet and, by working together and sharing knowledge, try to fix all sorts of gadgets: radios, sewing machines, consoles, bicycles, umbrellas, trousers, etc.

This category of programme also includes the meetings on desktop publishing, Atlas, and the workshops for children that take place every Wednesday afternoon, Wednesdays in Ubik, among others.

When planning the programme, and in line with Ubik’s commitment to its users, throughout this first year we have taken into account the holiday periods, extending the provision of workshops and activities at times when many people have more availability. This is the case at Christmas and in summer.

In 2017 this programme has been maintained, and new proposals have been launched. These include, for example, Jolabs. Nosing around, workshops to introduce children and young people to digital technology, and My world. Philosophy for kids, meetings to question, think and talk about the issues we hear about and are living through in our daily lives, from the perspective of the youngest members of the family.

Among the programmes for adults, one of the most interesting has been the reading group Explorers, led by Martxel Mariskal, which is presented as a continuation of the meetings on critical thinking that began last year.

THE FIRST YEAR IN FIGURES

Since opening on 18 March 2016, Ubik has received more than 181,000 visitors. In addition, 9,371 people have obtained their Tabakalera card, which allows them to book services and devices and to borrow materials from Ubik. With these cards, 14,246 loans have been made during this year, including not just books but also magazines and films, video games, consoles, devices such as cameras and video cameras, and games.

Booking of technology spaces on 369 occasions

The cameras have been borrowed on 148 occasions

The video cameras have been borrowed on 87 occasions

The tripods have been borrowed on 94 occasions

The sound recording equipment has been borrowed on 82 occasions

The consoles have been borrowed on 126 occasions

The flash has been borrowed on 28 occasions

The tablet has been borrowed on 50 occasions

The laptops have been borrowed on 115 occasions

The mediators’ time has been booked for 419 sessions for individual training for users.

SYMBIOSIS BETWEEN UBIK AND THE OTHER AREAS

Throughout this year, Tabakalera has worked hard to establish a close link between Ubik and the other areas that make up the cultural project (cinema, exhibitions, Hirikilabs, mediation, creators’ space and public programmes). Thus, while the other areas add to the Ubik resources (through their programmes and the documentation that these generate), the creation library enriches them by expanding the available content related to the different themes being worked on, and by proposing new readings and itineraries. In this regard, for example, Ubik is proposing a series of documentary materials related to the topics discussed in the current exhibition Estimulantes: circulación y euforia [Stimulants: circulation and euphoria]. Thus, one of the routes for the progressive configuration of the Ubik collection is through the themes and authors included in the cultural project.

In addition to the library’s contents, the work with the public is another of the key elements of the daily activity of Ubik, as part of the Tabakalera cultural project.

Here the role of mediators has special relevance, since as they are experts in certain fields they are able to offer advice that allows the users to increase their knowledge and skill levels in the handling of the tools that are available to them (from finding out about the world of video games to filming footage on the set to lateredit it, or from the playing of musical instruments to experimentation in the field of desktop publishing, etc.). In this way Ubik seeks to activate the curiosity of its users, increase their knowledge about subjects that are also followed up in other areas of the cultural project.