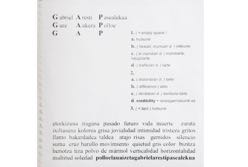 The HilHerriBizi project has been taking shape since it was selected in the School Peripheries 2016/2017 open call for proposals. In this project, the Polloe cemetery — adjacent to ikastola Lauaizeta — forms the nexus between the school and the community.

The project was put together over various phases: From October to December 2016, teachers from the school along with educators from Tabakalera set up a working group to co-design the project. The vast context offered by the cemetery was delimited to three concepts: memory, grief and physical space. The teaching staff have linked the content of their school subjects to these three areas. A research project on the cemetery was carried out in parallel, using artistic practices to respond to the following question: What will the cemetery of the future be like? In the first phase of research, each group has analysed the cemetery’s characteristics, functions and the images it conjures up. From there, the groups developed an idea of how the cemetery might look in the future in terms of its symbolism, sounds, performativity of the bodies and the space itself.
We have invited four artists to bring their creative methodologies to the project, based on the students’ interests and what they have decided to research and transform. They are: Mario Paniego, Miriam Isasi, Aitor Izagirre and Nerea De Diego.

The work will be presented on June 17th (coinciding with the school fair) as an installation in the cemetery.