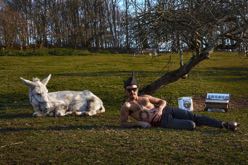 El mundo por montera is my second solo act. A sarcastic call to attention in the format of a zarzuela BUFA. Made in Asturias for the world. A new show where I display my universe: a traditional, rural and eccentric world that is also urban, critical and technological. My search is the true essence; a personal work taken to the stage; a sincere exhibition to discern between what's truly important and what is banal and dispensable.

A spectacle where there is more folklore, more popular music and more laughter, all held together with musical and vocal quality.