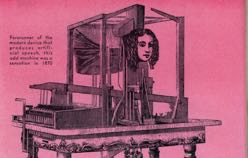 Every Thursday this summer, always at half past eight in the afternoon, the rooftop terrace of Tabakalera will again host a selection of work linked to live performance arts. From 6 July until 31 August we will be able to enjoy different proposals that combine sound, the body, movement, choreography and language.

Voz Mal ( Mal Mal ) is a compilation concert performance and a listening session that explores the voice and listening based on cases such as the masculinisation of Margaret Thatcher's voice, the aural history of synthetic voices or the human microphone of Occupy Wall Street.