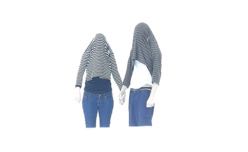 With the hair of Juana Molina, the nose of Idoia Zabaleta, the body of Gloria Fuertes, the right arm of Elena Santoja, the left arm of Gloria van Aerssen, the lips of Michel Etchecopar, the eyes of Martirio, the grey hairs of Harkaitz Cano, the hands of Cheikha Remitti, the fingers of E.T. and the accent of Markku Peltola I will become Frankenstein’s wife, a looper-rapper, a preaching weaver and Mauritanian shaman.