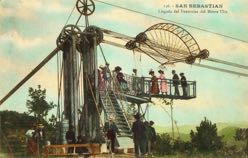 "Leonardo Torres Quevedo was born in the Valle de Iguña (Cantabria), his family lived in Bilbao, where he studied at the Vizcaíno Institute, was a Civil Engineer, and basically dedicated himself to developing" machines "dedicated to transportation (air ferries). , dirigibles, bimarán), calculation (analog and digital), remote control (telekino), and automatic (chess player) .It also made inroads into other fields, with inventions such as the dianemologist (1907), or a guidance system by cities, we can say that it was a prototype of "maker" (cacharrero).

This SummerLab was related to the ferry Ulia, an aerial tramway from Mount Ulia opened 110 years ago. It was 280 meters long, and saved a gap of 28 meters between the departure and arrival stations. The trip was made in just over three minutes and could take up to 18 people on each trip.

With this proposed node within the SummerLab was intended to create a stable group in the future that could work around the development maker of projects related to the technical heritage. For this the following activities were considered:

18:00 Guided tour
To the remains of the Ulía ferry departing from the park of the nurseries of Ulia, where since July 7 a model of the old amusement park and the cable car had been installed. The guides of the visit were Josu Aramberri and Francisco González.