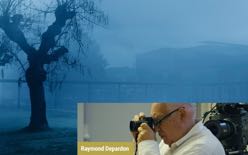 Raymond Depardon (1942) is a prestigious French photographer and director. He has directed twenty feature-length films and more than fifty books of his photography have been published. Co-founder of the Gamma agency and photographer with Magnum, as a reporter he has covered some of the major news events worldwide. In 1991 he was honoured with the Grand Prix National de la Photographie. He has won the César for Best Documentary twice, for Reporters (1981) and Délits Flagrants (1994). Among his latest works are La Vie moderne (Modern Life,2008), Journal de France (2012) and Les habitants (2016).

For thirty years, Claudine Nougaret and Raymond Depardon have shared their passion for cinema and photography, she working on sound and production, he on the photography and direction. Self-taught artists, they founded their own production company Palmeraie et désert, and together they have created numerous films, notably: Urgences(1988), La captive du desert (Captive of the Desert, Cannes 1990), Délits flagrants (Caught in the Act,1994), Afriques, comment ça va avec la douleur ? (Africa, How Are You with Pain?, 1996), Paris (1998), Profils Paysans: l’approche (2000), 10e chamber – Instants d’audience (The 10th Judicial Court: Judicial Hearings,2004), Profils Paysans: le quotidien (2005), Profils Paysans: La Vie moderne (Modern Life, 2008), Journal de France (2012), France (2016) and 12 Jours (12 Days,2017). From the beginning, Claudine Nougaret has favoured direct sound in her productions. After studying musicology, she worked as a projectionist while taking evening classes in sound at the Collège Louis Lumière. She learned the ropes of her trade as sound assistant on films by Alain Resnais, Gérard Junot, Chabrol, Claude Miller. In 1986, she was responsible for the sound recording on Éric Rohmer’s The Green Ray, winner of that year’s Golden Lion at the Venice Film Festival, and established herself as one of French cinema’s preeminent female sound recordists. Further credits include Philippe Garrel’s Les baisers de secours and La Nage indienneby Xavier Durringer, amongst others. With Sophie Chiabaut she co-authored Le son direct au cinéma, published by Éditions La Fémis, before devoting herself to the films she produces for Raymond Depardon, documentaries to which she brings the skill and technical demands of feature film sound engineering.