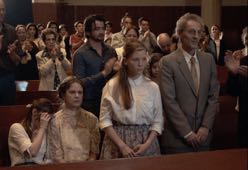 An offer of a job as a prison educator could help unemployed teacher Jakub resolve a difficult family situation. His father-in-law exacerbates his already low self-confidence, and the man most certainly imagined a different kind of son-in-law. The claustrophobic feelings Jakub experiences at the prison, however, lead him to a single question: Does he want to control others the rest of his life or be controlled by them?

It's the 23rd of June 2016. In the UK, a critical referendum is well underway, and across the Atlantic, an ominous American presidential campaign is gathering force. In Sweden, news broadcasting is carrying on as usual. In Germany, however, an identical, yet distorted, news broadcast is simultaneously being constructed by the citizens themselves.

A typical family is being watched in their own home. The father, an accomplice to the situation, obliges the other members of the family group to participate in the dynamic. The mother tries to escape with her daughters, but to no avail.