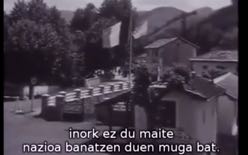 We live in a multilingual region. In a diglossic region. In the region with languages that are spoken in countless places outside their place of origin, in the region whose language has been forbidden in its own place of origin and which has barely survived. Barely, yes, but it has survived, and people are using that language; to write, for example. That people outside the region of origin read their work is a step in the path of the writer, and these multilingual (or at least bilingual) authors might find it easier to self-translate than to assign the translation to anyone else.

In short: as it is a reality, it is necessary to analyse the practice of self-translation carried out by authors who write in Basque. Up until a couple of decades ago, only the work of a few prominent authors was translated into other languages, but thanks to some changes (the stability, to a larger or lesser extent, achieved by the Basque literature system; the grants to publish books in Basque abroad; the work by the EIZIE translators’ association; the creation of the Etxepare Basque Institute and its initiatives), an increasing number of writers are following this path.

The goal of this seminar is to analyse all the above. Thus, theere will be an introductory session, slightly more theoretical, during which two researchers who work on the subject, Garazi Arrula and Elizabete Manterola, will explain the general context of self-translations. Later, in two practical sessions, we will see the work by two authors who have translated their own writings into Spanish: Eider Rodriguez and Ixiar Rozas.

Speakers Garazi Arrula and Elizabete Manterola will explain what the self-translation from Basque consists of and will share their research in this field.

Eider Rodriguez has published three story books: Eta handik gutxira gaur; Haragia and Katu Jendea. She has translated all of them into Spanish herself: Y poco después ahora, Carne and Un montón de gatos; the first two by herself and the third in collaboration with Zigor Garro. In addition, the story «Katu Jendea» was translated to four languages (Spanish, French, Dutch and German) inside the initiative "The Writer and its Translators", and the Basque Institute Etxepare published it in 2012. On the other hand, in 2013, Rodriguez published an anthology of stories in Spanish: Ortigas. Una antología de relatos. Once again, she was in charge of its translation.

In this practical session we will analyse the self-translated work by Rodríguez. We will focus in particular on the story «Gatos», as it is set in Hendaye and reflects its border character through language and narration.

At 1pm, Eider Rodríguez herself will offer a public talk in the Z Hall.

Ixiar Rozas has published six books in the field of basque literature: Patio bat bi itsasoen artean (poetry); Sartu, korrontea dabil (narrations); Edo zu edo ni and Negutegia (novel); Gau bakar bat (theatre); and Beltzuria (essay).
She has translated four of these books into Spanish herself: Luego les separa la noche; Una sola noche; Invernario and Beltzuria. The last of them translated in collaboration with Jose Luis Padron. In this practical session we will analyse the self-translated work by Rozas.

We will focus in particular on the translation of the book Beltzuria, as it has been recently published, it is a translation carried out in collaboration, and because the story is set in a border area: in Etxalar.

At 7pm, Ixiar Rozas herself will offer a public talk in the Z Hall.