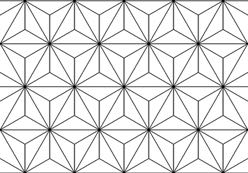 For a long time, many Hirkilabs users have wanted a place in the laboratory where a tool to allow them to undertake textile projects would be on hand. This is a natural need as both digital creation and electronic creation are more and more present in the world of textile creation.

We will work for three weeks to this end. In the first week, we will finish the space. In the second week, we will experiment with the possibilities that technology has in the world of textile creation, and in the third week, we'll put our neurons to the test with what we've learned.

Malús Arbide has spent a great deal of time working with the creation of patterns, which she subsequently applies to her textile creations.

In order to use the lab's machines, we are going to try to transfer this practice to a free tool like InkScape. After that, we will investigate the possibilities for fabrication in vinyl, laser, and 3D printing.