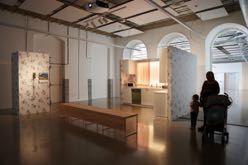 American cinema director Tamyka Smith was a resident in the first edition of Ikusmira Berriak, an audiovisual development programme, where she developed her short film Gwendolyn Green. The film will have its world premiere at the San Sebastian International Film Festival as part of Zabaltegi-Tabakalera, the experimental section that admits films which go beyond the screen and into installation format.

The film follows Gwendolyn Green, an elderly, widowed woman living out her days alone, inside a gated Palm Springs residence, as if she were stuck in another era. As Gwendolyn’s lack of social graces and isolation start to close in on her, she picks up the telephone and dials 911 in search of human connection.

Viewers will watch the film within an installation replica of Gwendolyn’s kitchen, where much of the film’s action takes place. As the film’s setting is revealed, viewers are able to recognize the wallpaper and location of their present environment as it is mirrored on screen, eliciting emotions of isolation, empathy and emotional claustrophobia. The installation is fully interactive — kitchen drawers reveal a life of worn cutlery, hand scribbled notes on the wall provide clues of Gwendolyn’s private life and upon lifting the kitchen telephone viewers are greeted by Gwendolyn’s voice.

The installation experience is guided by timed lighting design, bringing us through the passing hours of Gwendolyn’s day. The final hours of fading light bring us into the film experience.