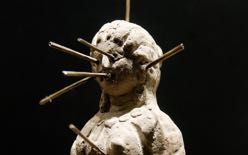 Many of the visions experienced by mystics throughout the ages used the metaphor of the ‘third eye’ to refer to the symbolic organ through which the mystic phenomenon was channelled.  Whilst other expressions have been used historically to describe the ‘third eye’, they all sought to explain the seer's perception of something beyond the scope of our other senses. The ‘third eye’ existed in Greek philosophy and was of vital importance in medieval thought. As a concept, it encompasses perception of that which goes beyond the mere act of seeing, but in parallel to this mystics and visionaries commonly interacted with images and the visual religious art around them, using what is similarly called the ‘eye of the flesh’.

In this seminar, and the conference that follows, we’ll take a unique journey through some of the most recurrent debates and problems concerning those optical phenomena which seem to contravene the laws of vision, and which have brought the worldly and the divine face to face since antiquity through to the present day. We’ll start from the premise that, as Victor I. Stoichita said, “visionary experience is an experience of image”.