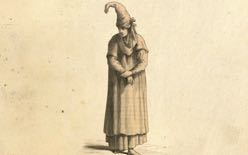 Reading set to music, and talk

Part of the Smoke politics programme, which republishes historical conferences, this event retraces a history which takes us from the 12th century Cologne to 20th century Durango, guided by the imagination of several clergymen. Ander Lipus will read Herejeen alaba (The Daughter of Heretics), recently published by Pamiela, accompanied by Medieval music from Khantoria, a group formed by Maider López Delgado (viola) and Ander Berrojalbiz (rebec).

“In the place where heretics were burned, we’ll find a glass heart in the ashes.”

A friar sets out from Roncesvalles for Durango. Once there, he’ll find out that twelve heretics are to be burned the next day, including a little girl: the daughter of the heretics. This is the starting place for the story Kristalezko bihotza (Heart of Glass).

Written by Joseba Sarrionandia during the “empty time” of prison whilst “lost in Arthurian and Medieval literature”, this is a tale which intertwines the reality and fiction of historical sources. The discoveries which led to this project have been brought to light, and the relationship in this case between reality and fiction is highly complex, shown in various layers of history understood on one hand as the retelling of events, and on the other as a fictitious tale.