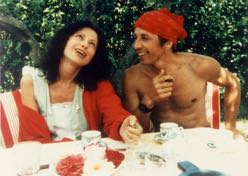 In 1882 the French writer Jules Verne published Le rayon vert, his most romantic travel novel. The book tells about the search by the protagonists for the green ray, an optical phenomenon that occurs under certain atmospheric conditions and which results in the appearance of a greenish-yellow or bluish-green flash when the sun is about to disappear over a very flat surface. The legend says that this moment is magical, and that two people who experience it at the same time will immediately fall in love.

Taking this story as a reference, the French director Éric Rohmer presents the fifth and penultimate part of his series of “Comedies and proverbs”. Delphine is a young Parisian who does not have a clear plan for her summer holidays and who wanders from one place to another trying to get over an unhappy love affair. This is when she arrives at the coast of Saint-Jean-de-Luz and when she hears a conversation about Jules Verne’s novel. It is also when her destiny will take an unexpected turn.

The film won the Golden Lion and the FIPRESCI Prize at the Venice Festival in 1986.