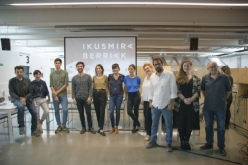 Also travelling to San Sebastián to accompany them throughout this process was the panel of experts made up of the Irish producer Fodhla Cronin O’Reilly, the Brazilian filmmaker Sergio Oksman, and the director of TorinoFilmLab, Savina Neirotti, individuals who have also attended the residents' pitch sessions. The Romanian maker Constantin Popescu will give residents a talk next week. Popescu competed last year in the Official Selection with Pororoca (Golden Shell for the best actor as a result of Bogdan Dumitrache's work). The third week of the residency, filmmakers Tizza Covi and Rainer Frimmel –founders of Vento Films– will share their documentary cinema knowledge and experience with the residents.

During the fourth week, residents will visit the facilities at REC Grabaketa Estudioa, and they'll have time to work individually on their projects. During the fifth week, they'll prepare their presentations for the industry, with said presentations will being made on Sunday the 23rd as part of the Europe-Latin America Co-Production Forum at the Festival. Residents will also have a meeting with the students of Elías Querejeta Film School.

During their final week, residents will have their own space at the San Telmo Museum –seat of the Co-Production Forum– to undertake their one-to-one meetings with the accredited professionals who show interest in their projects. Additionally, they'll be able to participate in the rest of the industry activities and attend Festival screenings.

During the press conference for the film industry awards ceremony, to be held on Wednesday, September 26, the winner of the fourth annual edition will be made known. In addition to the financial support of 25,000 euros provided by the programme and distributed amongst the chosen projects, REC Grabaketa Estudioa is offering, as an award, its feature film post-production services – a value of 35,000 euros.

Three projects selected from previous editions of Ikusmira Berriak have been finished and screened at the Festival: the short films El extraño by Pablo Álvarez, Calipatria by Leo Calice and Gerhard Treml, and Gwendolyn Green by Tamyka Smith were presented at Zabaltegi-Tabakalera in 2016 and 2017.  This year, the programme's first finished feature film made its debut in Locarno: Trote, directed by Xacio Baño, a resident during the first edition whose film will also be shown at Zabaltegi-Tabakalera.

This fourth annual edition will be the last one under Ikusmira Berriak's current structure. The next edition will be divided into two stays: one in February and one in September. The call for the fifth edition, which will be held in accordance with the new model, will close on the 31st. In October, the five selected projects will be unveiled.

We asked the five filmmakers about why they presented their projects for the Ikusmira Berriak programme and the expectations they have for the experience.

Why did you decide to apply for a residency through Ikusmira Berriak?

What are your expectations?

I consider Ikusmira Berriak to be the ideal context for the conceptual development and writing work for my new project El Oasis. I remember that last year, when I presented my film Soldado in the Zabaltegi-Tabakalera section of the San Sebastián Festival, I was fascinated by the city: I think that it's magical. I also visited Tabakalera for the first time and I thought it was an incredible place. That's when I said to myself: "It would be amazing to come here to work for more time." A few months later, I found out about the Ikusmira Berriak residencies and I didn't think twice about applying with El Oasis. Last year I was working non-stop on different projects all at once. Sometimes it's hard to find the time and the space to move forward on each one. That's why I really appreciate the opportunity to use these six weeks to finish up my writing of this film, as well as the chance to cooperate and share in the process with other filmmakers and colleagues from the film industry.

I consider the Ikusmira Berriak residency a chance to work exclusively –with the necessary dedication, time, and resources– on this new project. A long-term stay in which research and creation processes can be shared, points of view can be discussed, and associations can be made within a context of exchange and cooperation with other colleagues who are going through similar processes with their films.

My first international film festival was the 64 SSIFF. I was very fascinated by it and for the first time I publicly declared - "I am a director". The participation of my graduation student film at the 65 SSIFF gave me confidence and this place became a native, my ‘second school’. Therefore, it is a great pleasure for me to participate in the Ikusmira Berriak residence and continue my post-graduation education on the threshold of my debut feature film.

I am stumped. There are so many different thoughts about my film in my head. Ikusmira Berriak is a great opportunity to leave all the problems and devote these weeks only for project developing. I expect a rustle of thoughts.

I was already familiar with Tabakalera because of prior cooperative work, and I had also heard other former residents explain that it had been a very satisfying experience. I think that the context is ideal to be able to concentrate on a specific project; I think that it's something very enriching – not only because of having lodging secured, but also because of being able to share the space with other filmmakers and creators.

I hope to be able to finish up my script first and foremost, but I also hope to be able to share experiences with other professionals. I also find the role of the different experts (filmmakers, programmers, producers) quite stimulating, as said individuals can give us personal advice.

Over these six weeks I hope, above all, to have a space for concentration; I think that for those of us who are here, we need ‘retreats’ like this one. Without this type of stay, making films is really complicated.  Additionally, I'm quite interested in giving and getting feedback on the projects that we're working on here; the tutorials, relations between the directors, the whole Zinemaldi period, etc. I think that everybody's projects will grow a lot these days.

The residency sounds quite generous: a space and living expenses paid for to be able to concentrate on my work, tutorials, money to continue developing the project. And the length seems great to me: not too short, but also not too long.

A little push to help me rethink my project and clear up unresolved issues, time to write, exchange with my colleagues, the sea.