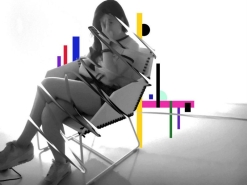 Collaboration between Dantz, the electronic music festival, and Kutxa Kultur.

Artists like RRUCCULLA force us to revisit the time variable to better understand them: her compositional rhythm is diabolical, treating its records like they have an expiration date, as if they were edible and would taste differently after few weeks. That's why she is always creating, looking towards the future so as to get there before anyone else. Her next record, the title for which she is yet to reveal, is the 13th work of her career and, naturally, RRUCCULLA has already abandoned the mental state she entered to create it weeks ago, moving on to concentrate on the next world to be discovered. The lair from where her sounds are pulled is inexhaustible.

This music producer from Barakaldo is emotional, unpredictable, and colouristic, where pop, the fervour of footwork and IDM, hip hop, jazz, and math rock mix in a surprisingly natural way, with an intentionality as experimental as it is concrete. The combination only makes sense at the hands of RRUCCULLA, as if it all follows a childish logic.