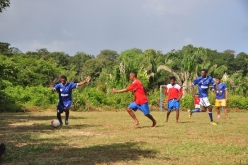 Sorting things out with a dolphin: anthropologists and the thousand bodies of the wild.

Aníbal G. Arregui will give a masterclass named Sorting Things Out with a Dolphin: Anthropologists and the Thousand Bodies of the Wild.

For more than a century now, the self-proclaimed science of human beings has been studying the formal characteristics that distinguish the natural from the cultural, barbarism from civilisation, the human from the animal. In all that time, 'the wild' has remained as one of the most recalcitrant ideas of anthropological thought. 'The wild' has mutated from the bodies of animals to 'indigenous' bodies, from untamed landscapes to the violent atmosphere of the Anthropocene… and, hence, 'the wild' is returning to animals, plants, mushrooms, cells, bacteria. And, as G. Arregui notes, "what if 'the wild' is within human beings themselves after all?”

G. Arregui accompanies the secular efforts of anthropologists to stabilise 'the wild' into some type of bodily manifestation, whatever that may be, with the only condition that what is stabilised be not 'merely' a metaphor but, instead, a body. As a personal response, he will offer an ethnographic case: that of the Amazon River Dolphin, the so-called "Pink River Dolphin," and their bodily and sensual fit into the world of the riverside populations of the lower Amazon region (Brazil). The explanations that he extracts from that example are equally or more unsatisfactory than those which have already been offered in his discipline: he will argue that 'the wild' is a positional phenomenon. Does that have anything to do with our body? The Asturian anthropologist says that it probably does because, according to this hypothesis, the emergence of 'the wild' depends on who (or what) we have before us.